The Memorial
A stone tablet near the entrance of the Chinatown of Boston, on which the following text was sculpted in both English and Chinese:


Tiananmen Memorial
This park is dedicated in honor of the democracy movement in China and in memory of those who died in the struggle for freedom in Tiananmen Square in June 1989.
Raymond L Flynn, Mayor
September 10, 1989
City of Boston 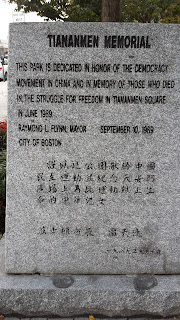 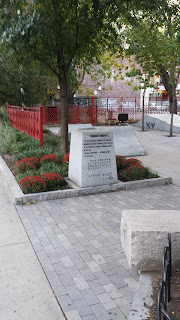 Location
At a small park near the entrance of Boston Chinatown:


History
The tablet was erected on September 10, 1989, three months after the massacre.

In March, 2010, Boston Globe reported that there was a community dispute on whether to keep this memorial. A compromise was reached to move the tablet into the current, less prominent location.