In anticipation of the coming thirty-year anniversary of the normalization of relationship between China and the United States, the National Committee on United States - China Relations hosted a panel discussion, Once Upon a Time in Beijing, attended by five former U. S. Ambassadors to China, on December 9, 2008. The program was broadcast on C-SPAN and available on YouTube.

Near the beginning, at about the 11:45 mark, Ambassador Winston Lord, who was in China between 1985 and 1989, recalled one of his highlight/lowlight moment:


It was in June of 1988, a year before the Tiananmen, meeting with Chinese students, hundreds of them in what came to be known as the Democracy Salon and see their passion and their eagerness. It was a highlight, but also a lowlight. I have to elaborate this because a few days later Deng Xiaoping sent me a personal message to not to meet Chinese students.

The "Democracy Salon" he referred to here was the one organized by Liu Gang and had been in weekly session by that point. It was held at a grass lawn in Peking University and regularly attracted dozens to hundres of students.

Winston Lord's visit to the Salon drew a big audience that day. Later in the day, a graduate student was killed in an apparent isolated violence off-campus. A small-scale student movement broke out for the occasion and Liu Gang, by the time no longer a student, was banned from the campus. The initial outdoor "Democracy Salon" was therefore interrupted but later resurrected by Wang Dan in his dormitory building.

In this panel discussion, Winston Lord proceeded to describe the incident when Fang Lizhi was forbid to attend a banquet hosted by visiting President George H. W. Bush as another lowlight of his time in Beijing.

Much later in the program, at about 1:07:30 mark, Winston Lord's successor James Lily gave an interesting account on the manuvers involved in getting Fang Lizhi out of China after he had taken refuge in the American embassy following the Tiananmen massacre.

New York Times reports that more than 160 prominent writers, scholars, and human rights advocates, including three Nobel laureates, had signed an open letter asking for the release of Liu Xiaobo.

The paper also indicates that Liu Xiaobo is now the only signatory of the Charter of 08 who is still in detention. All others who were detained and questioned have since been released.
Posted by Eddie Cheng at 9:08 PM No comments:

It was thirty years ago this month when Deng Xiaoping kicked off his reform era on the landmark Third Plenary Session of the Eleventh Congress of the Communist Party. The anniversary is marked with a grandiose conference in Beijing today. In his keynote speech, President Hu Jintao predictably vowed not to turn back the reform and not to copy the Western-style democracy either.

But the official People's Daily appeared to have other ideas. It headlined Hu Jintao's speech as an "eulogy" for the reform.

The Associated Press compiled a chronology of China's reform era:

1978: Economic, social and cultural reforms launched under Deng Xiaoping, two years after the death of Mao Zedong. GDP per capita is 381 yuan.

1994: China connects to the Internet.

2004: The United Nations estimates 1 million Chinese are infected with HIV.

Posted by Eddie Cheng at 9:00 PM No comments:

Defending the Great Firewall of China

Perhaps due to the combined threat of the "Charter of 08" and the coming twentieth anniversary of the 1989 student movement, Chinese government is once again blocking foreign news web sites, a practice that had been interrupted by the Beijing Olympics.

But instead of denying the existence of this well-known censorship, Foreign Ministry spokesman Liu Jianchao acknowledged the existence of the Great Firewall of China for the very first time. He justified the action by claiming that some web sites possess contents that are against Chinese law.
Posted by Eddie Cheng at 10:39 PM 1 comment:

Fallout Continues for Charter of 08

Various news reports show that the "Charter of 08" is receiving more attention in the forms of both additional signatures and government crackdown. It is reported that more than 3600 people in China have signed the document so far.

A web site Chinese Human Rights Defenders had published a map of known detentions related to the Charter of 08. The web site is currently being reported as an attack site, presumably having been hacked. 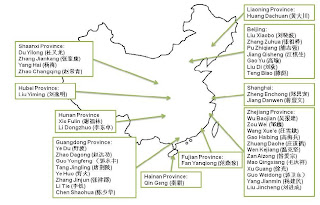 Besides Liu Xiaobo, the map shows several names of veterans of 1989: Pu Zhiqiang, Jiang Qisheng, Gao Yu. A couple of them have been active in a few Internet forums until recent days.

According to a source close to this fledging movement, the "Charter of 08" is a well planed and thoughtout action. Many of its initiators are prepared for going to jail. As the twentieth anniversary of the 1989 movement apporaches in a few months, more activities could be expected to test the limits of an extremely nervous and anxious government.
Posted by Eddie Cheng at 10:04 PM No comments:

The "Charter of 08" which led to the arrest of Liu Xiaobo has been translated into English by American Professor Perry Link. Taking at its face value, the charter does not contain any ground-breaking material by itself. Mainly, it is a list of liberties people have long taken for granted in the "free world".

However, the significance of this charter lies in the fact that it is cosigned by 303 known scholars and the like. Additional signatures are still being collected. A collection action by the intellectual community in China on such a scale has not been seen for decades. In fact, the last time this happened was precisely in 1989.

The precursor of the 1989 student movement started when Professor Fang Lizhi wrote an open letter to Deng Xiaoping for the release of political prisoners. His letter was followed by several supporting ones, each co-signed by dozens of prominent intellectuals. Later that year, in the heat of the movement, various statements co-signed by hundreds were frequently published.

It also includes a few parents and relatives of the victims of Tiananmen Massacre, known collectively as the Tiananmen Mothers.

If nothing else, this collective action demonstrates the power and sophistication in organization or at least networking skills within the suppressed dissident community.
Posted by Eddie Cheng at 7:34 PM No comments:

Another round of crackdown is quietly in progress in Beijing as hundreds of activists cosigned a "Charter of 08" on the occasion of the 60th anniversary of the U. N. convention on human rights. One of its initiators, scholar Liu Xiaobo, was arrested and charged with "conspiracy and inciting subversion".

Liu Xiaobo was a professor in Beijing Normal University in 1989. He was visiting Columbia University in New York that Spring when he decided to return to Beijing. On June 2, he led a hunger strike by what to be called "Four Gentlemen" in Tiananmen Square, hoping to be able to assert more adult influence to the students there. The effort paid off when the "Four Gentlemen" were instrumental in leading the students safely out of the Square in the night of massacre.

Liu Xiaobo was initially blamed as the "black hands" of the movement but eventually was released without a formal charge. He did serve 20 months in detention however.

Also arrested is an activist by the name of Zhang Zuhua (张祖桦). Unconfirmed report has also been circulating on the internet in recent days that former student leader Zhou Fengsuo has been arrested while attempting to return to China.
Posted by Eddie Cheng at 7:22 AM No comments:

It was thirty years ago when Wei Jingsheng, a twenty eight year old electrician, posted an article on the "Democracy Wall" calling for the "Fifth Modernization" -- democracy. Jane Macartney reports on this historical event on the Times.

Wei Jingsheng did not stop there. He later posted more posters accusing Deng Xiaoping as a new dictator. He was sentenced for fifteen years for the dual crime of counter-revolutionary and selling military secrets to foreign journalists.

After ten years in jail, Wei Jingsheng had become a forgotten man by 1989. But it was Professor Fang Lizhi who brought his case into public attention with an open letter to Deng Xiaoping. The open letter became a prelude to the largest student movement that year.
Posted by Eddie Cheng at 10:57 PM No comments: