Book About Tiananmen: The Martial Law Troops in June 4 Event 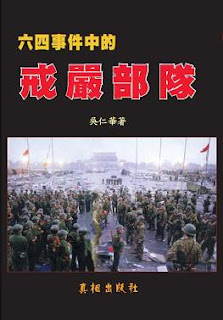 The book The Martial Law Troops in the June 4 Event (available only in Chinese) is the second book written and self-published by Wu Renhua, a participant of the 1989 student movement and eyewitness of the massacre, following his previous Inside Story of the Bloody Clearance at Tiananmen Square. This book was published in 2009 and is mostly available in Chinese book stores at Hong Kong and elsewhere, as well as the author's site online.

For the past 20 years or so, the author has spent enormous time and effort collecting and analyzing historical records of the movement, especially the details of the bloody massacre. This book is the fruition of his belief that "we must name the killers" as it collects some of the names of officers and soldiers in the Chinese People's Liberation Army who participated in the massacre.

For this purpose, this book adopted a style close to an encyclopedia. After an introductory chapter, every chapter focuses on one particular army or other military unit, laying out its history, its actions during the martial law and massacre, and a list of available names of that unit, all in the same structure. In the preface, the author claims that the book "provides a most complete list of military officers who had been promoted after the massacre and, for the first time, a list of names of the participant officers and soldiers." Compared to the "between 180,000 and 250,000" troops mobilized, estimated by the author, the list of more than 2,000 collected names is indeed minuscule. But it also reflects the extreme difficulty in such research.

Besides those two lists, a particularly interesting analysis is of the 15 dead soldiers who had been awarded with the "Guard of the Republic" by the government. The author points out that 6 of them actually died in an auto accident, another of disease, and yet one of friendly fire.

Troop actions in 1989 has of course received some attention in the historical literature. Timothy Brook's Quelling the People is but one example. But it is still rare to see such systematic and detailed description of all military units as in this book.

The book also has its shortcomings. It only contains very few references for its sources, most of which referring to a few propaganda books published by the government in the immediate aftermath. Much of their contents were used directly without critical analysis. Some material in the book, including the names, are not sourced.

Due to its reference book style structure, this book is not very readable to the average reader. It is also difficult to use as it failed to provide an index. Therefore, its readership may be restricted to scholars and those who have keen interests in all things military. Nonetheless, this book will stay as a unique reference to one facade of the 1989 movement.

Chai Ling, whose recent media exposure centered around her newly acquired religious belief, is now being sued by one her former employees for religious discrimination. Boston Globe reports that:


The employee, Jing Zhang, is a Chinese activist who once spent five years in a Chinese prison for promoting freedom and democracy, according to the suit. In the United States, Zhang had already established her own nonprofit, Women’s Rights in China, in Flushing, N.Y., when she joined forces with Chai to develop programs to prevent forced abortions in China. Then, she alleges, Chai fired her for being insufficiently religious and for declining to engage in “weekly corporate worship.”

The case may hinge upon the nature of Chai Ling's non-profit organization "All Girls Allowed," as whether it could be categorized as a religious one which are exempt from such discrimination. The report also points out, however, that Zhang Jing is actually an employee of Jenzban, a business founded by Chai Ling and her husband.

Zhang Jing is a Cathoric herself and refused "to practice her faith in the same manner as her boss, who is an evangelical Christian."

Book about Tiananmen: A World Transformed

President George H. W. Bush was only in office for four years but during that period (1989-1993) he saw what could be termed as the most dramatic change of world politics in our modern history. His memoir A World Transformed, co-authored with his National Security Adviser Brent Scowcroft and published in 1998, candidly recorded the foreign policy operations of his administration.

With the fall of Berlin Wall, the collapse of the Soviet empire, the wars in Panama and Gulf, it is perhaps understandable that the book only has a very small number of pages devoted to the effects and aftermath of the Tiananmen Massacre and the China affair in general. They are pretty much limited to Chapter 4: "Untying a Knot."

The chapter or book did include any thoughts or reactions of the authors while the 1989 student movement was in progress. Rather, it started right after the massacre, which caught the President by surprise. The chapter did contain valuable first-hand information on the thought process, strategy, as well as tactics the authors invoked, including excerpts of Bush's diaries at the time. It also provided a glimpse to the behind-the-scene, and sometimes secret, personal diplomacy spearheaded by Scowcroft. Both of them had been to China and met Deng Xiaoping personally before 1989 -- Bush as the first envoy to the People's Republic and Scowcroft as a participant of diplomatic missions by Presidents Nixon and Ford.

The title of the chapter is a phrase borrowed from a Chinese proverb meaning that a knot could only be untied by the one who originally tied it. Here, the knot is referring to the estranged state of the US-China relationship with Deng Xiaoping and Bush alternatively blaming the other as the one who tied it up.

The title accurately reflects President Bush's view on the situation. He never saw it as an opportunity to advocate liberty and human rights in China or condemning tyranny, but just a troublesome mess he had to untangle with his diplomatic skill. From the very beginning, he was fixated at preserving the fragile US-China relationship and determined to go out of his way to achieve it. He did condemn the Chinese government and impose limited sanctions. But he did it largely because he had to, not because he wanted to, as he repeated explained to his "old-friend" Deng Xiaoping in his then-secret personal communications.

The book also contains fleeting descriptions of the fights the Bush White House put up against the Congress and American public opinions in various China-related issues such as the scope of sanctions, the Most Favored Nation status, and the protection of Chinese students in the US. (The last one was largely a political turf fight with both sides making the same policy actions.)

Most foreign policy memoiors written by top government officials tend to be dry and largely unreadable. Bush and Scowcroft's A World Transformed is a refreshing exception. The book is written in a style that interlaces either author's first-person account of the events with a supplemental third-person story-telling to provide background and perspectives. As such, the entire book reads like a fascinating conversation recounting the past by a pair of old hands. Unfortunately, against the back drop of the emerging New World Order, Tiananmen and China did not receive a proper billing in their account.