Book Review: Inside Story of the Bloody Clearance at Tiananmen Square 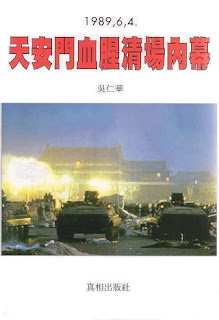 The Inside Story of the Bloody Clearance at Tiananmen Square is a book currently only available in Chinese language. The book was published about 4 years ago at the 18th anniversary of the Tiananmen massacre.
This book was written by Wu Renhua, an integrate character in the 1989 student movement and in my own book Standoff at Tiananmen. As early as April 17, 1989, Wu Renhua, then a teacher at the University of Political Science and Law, had helped to organize the very first public demonstration following Hu Yaobang's death. Later on June 3rd, just as the bloody crackdown was approaching, he volunteered to lead a special team of student marshals into the Square to safeguard the hunger striking "Four Gentlemen" there. It is also because of this act, he put himself right in the middle of the actions of that fateful night. From the vantage of his location on the top of the Monument of People's Heroes, he had an excellent view of the entire Square.
After the massacre, Wu Renhua eventually escaped by swimming to Macao through icy sea water. He settled at Los Angeles and was the chief editor of a dissident newspaper Press Freedom Herald for many years. Through the paper he collected and published numerous articles on the history of the movement.
The book Inside Story of the Bloody Clearance at Tiananmen Square was the first book Wu Renhua wrote. It traces, hour by hour and sometimes minute by minute, the some 20 hours from when he arrived at the Square in the early afternoon of June 3, 1989 to the dawn of June 4, as he led the last group of the students withdrawing from it under gunpoint.
It was not just a timeline, however. The author also included much material that were written by others which added either scenes from locations the author could not witness directly or to the historical perspectives to the individuals and events.
There are indeed surprised. The most startling of which is the exact sequences of students' exit from the Monument, their last base in the Square. Previously, it was widely believed that they made a remarkably orderly retreat after a voice vote conducted by Feng Congde, therefore avoided a potentially horrendous bloodshed. Yet Wu Renhua pointed out from his own experience that only less than half students followed that decision and left in somewhat orderly fashion. The majority of them insisted to stay and left only after a combination of persuasion from their teachers and brutal beatings by the advancing soldiers. Their final withdraw was chaotic and almost fatal. At least one student leader was almost stampeded to death.
This, and much of the author's own observations that night at the Square, was adopted in the final Chapter of Standoff at Tiananmen.
Wu Renhua's book is not without shortcomings. As a self-edited and self-published book, it lacks sophisticated layout control. This is especially a problem when the author quotes substantial passages of other people's work. It is easy for readers to get lost and confused with what they are actually reading. Some of these materials used in the book had not been properly vetted for credibility and reliability and contain paragraphs that are known to be untrue or vastly exaggerated.
The book is available for ordering online.
Books About Tiananmen
Posted by Eddie Cheng at 3:04 PM