According to Epoch Times, Wang Juntao (王军涛), a prominent figure during the 1989 movement, thinks the recent arrest of Hu Jia is directly linked to the upcoming Olympics in Beijing. During an interview with the paper, Wang points out that the 2008 Olympics has in fact become a focal point for human rights in China. Therefore, the Chinese government wishes to control the dissidents and eliminate challenging voices before the Olympics.

Wang calls on the international society to pay close attention to the case and provide enough pressure to force the government to release Hu Jia.
Posted by Eddie Cheng at 7:34 PM No comments: 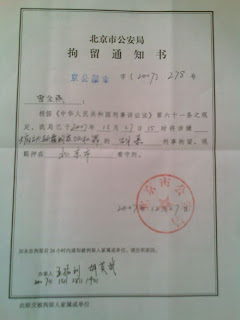 Internet reports that a riot broke out on Christmas Eve at Nankai University (南开大学), a major university in the city of Tianjin (天津). The riot was triggered by a traffic accident in which a car sideswiped a student riding a bike. Apparently the arrogance of the driver and police angered onlooking students, who gathered around and demanded for justice.

It escalated into students, numbered close to a thousand, trashing the car. At least one policeman was also beaten by the students. The riot lasted from 8:30pm to 1am, after a vice president of the school making several promises to the angry crowd. The promises include not to punish the rioting students and make improvements in traffic safety on campus.

As usual, any such news of student agitations are strictly forbidden in the mainstream media in China.
Posted by Eddie Cheng at 8:52 PM No comments:

A Timeline for the 1989 Student Movement

To kick off this new blog, I created a timeline for the 1989 student movement at xtimeline:

Posted by Eddie Cheng at 3:42 PM No comments: