The name Liu Di (刘迪) did not appear in many historical records or literature of the 1989 student moment. That was probably how he liked it.

Born in 1950 in Beijing, Liu Di belonged to a slightly older generation to the students at Tiananmen. He first became famous for participating in the April Fifth Movement in 1976 and landed himself in the most wanted list back then. He was captured and put in jail later that year and served 10 months until the verdict of that movement was overturned by the government.

Along with his fellow "April Fifth Heroes" Chen Ziming and Wang Juntao, Liu Di quickly got himself involved in the 1978 Democracy Wall and then 1980 election campaign in Beijing. His home in the city often served as the publishing house of the underground journal Beijing Spring and gathering place of various dissidents. Later, Liu Di helped Chen Ziming in the founding of their influential and independent think tank.

During the 1989 student movement, Liu Di was one of many older intellectuals who volunteered to assist and advice student leaders from behind the scenes. He was one of the organizers of the Capital Joint Conference which tried but failed to gain leadership to the movement as it was falling apart after the end of hunger strike.

After the massacre, Liu Di was arrested on July 10, 1989 and spent 9 months in jail. During the 1990s, he was active in raising international awareness of the human rights conditions of political prisoners in China. For the past decades, he was consistently denied of jobs or rights to travel abroad and had to survive by his wife's wage and his parents' help. But he never hesitated to help others who are in political trouble. 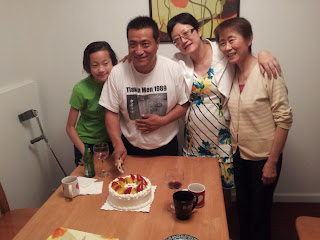 Fang Zheng, who lost both his legs during the Tiananmen massacre, is enjoying his new life in America. In the picture above, Fang Zheng is celebrating his 45th birthday with his daughter, wife, and mother-in-law (photo courtesy of Feng Congde). The happy couple is also expecting their second child.
Fang Zheng was also granted his green card recently. He is currently studying in a local community college and has his own driver's license.
Posted by Eddie Cheng at 11:33 PM No comments: