Pictures of 1989: Chinese Students March in French Bicentennial on July 14

On July 14, 1989, Chinese students in France were invited to participate in the Bastille Day gala, celebrating the bicentennial of the French Revolution. They marched with their bicycles and silent drums to commemorate their own failed revolution. 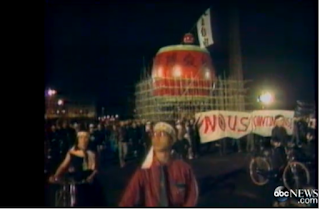 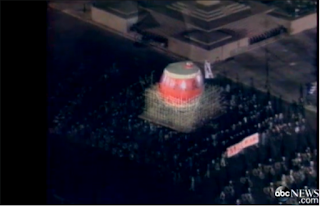 Xiao Bin was a worker from Da Lian, who happened to be at Beijing during the Tiananmen Massacre. On June 5, 1989, the day after the massacre, reporters from ABC were interviewing crowds in the streets of Beijing. Xiao Bing provided an animated presentation of the massacre which was largely out of his own imagination, including claims of "20,000 were killed," etc.

The Chinese government intercepted ABC's satellite signal and broadcast the interview on CCTV as an example of rumor-mongering. 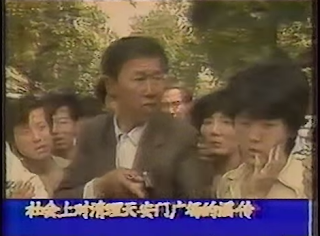 Xiao Bin's co-workers recognized him from the broadcast and turned him in. He was arrested on June 11. Although he immediately made a confession and apology on TV, he was sentenced to 10 years for "counter-revolutionary propaganda and instigation" on July 14. His prison term was longer than any of those received by student leaders.

Xiao Bin served out his sentence and was released in 1999. He is unwilling to talk about his experience.

On July 4, 1989, Yan Jiaqi and Wuer Kaixi became the first leaders of the 1989 movement to escape from mainland China. After reaching safety at Hong Kong, they published a statement calling for oversea Chinese to commemorate the massacre and continue on democracy movement.

Their escape was helped by the "Operation Yellow Bird," a clandestine effort spontaneously organized by a group of Hong Kong people to rescue movement leaders from mainland.

After the massacre, White House had immediately announced a suspension of high-level contacts between the two governments. However, President Bush was so worried about the Sino-US relationship that he penned a private letter to Deng Xiaoping. Soon after receive a positive response, he dispatched Scowcroft and Eagleburger as special envoys to maintain communication channels. Although Bush thought the mission was successful, he was nonetheless concerned that China did not provide any response of substance.

The July visit was kept in secret for a few months until in December of that year when a second visit to Beijing by Scowcroft was discovered by the media.

On June 30, 1989, Zhou Duo, who was instrumental in negotiating the withdraw of students during massacre, was arrested.

Also on this day, Beijing Mayor Chen Xitong delivered a comprehensive summary report on the 1989 movement to the People's Congress.

On June 23, 1989, the Xinhua Agency announced that Liu Xiaobo had been arrested for his role in the movement. Liu Xiaobo was actually arrested on June 6 when he stepped out of a diplomat apartment in which he had been hiding. But the arrest was not made public until this day.

Also on this day, People's Daily published a lengthy editorial calling for upholding the Four Cardinal Principles, mirroring the early one on April 26 that had escalated the movement.

On June 22, 1989, seven people accused of participating in the "counter-revolutionary riot" on June 4, 1989 were executed in Beijing.

They were initially sentenced to death by a middle court on June 17. In mere five days, their appeals to high court was rejected and the sentences were carried out.