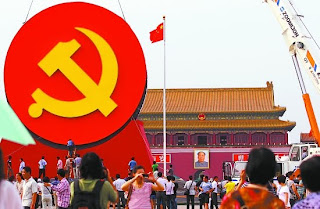 For the occasion of the 90th anniversary of the founding of the Chinese Communist Party, a new but temporary symbol -- the hammer and sickle emblem of Communism -- is now installed inside Tiananmen Square, right between the National Flag Pole and the Monument of People's Heroes.
The giant emblem, about 40 feet in diameter, is part of a red, heart-shaped floral display that will remain in the square during the celebration period surrounding July 1st, the official anniversary date.
It is the very first time in history that the party emblem is so prominently placed in the symbolic center of the country.
Posted by Eddie Cheng at 8:27 PM No comments: 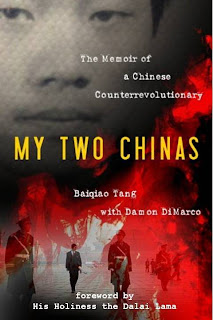 Tang Baiqiao's book, My Two Chinas: The Memoir of a Chinese Counterrevolutionary, came with high accolades. Its cover proudly boasts that the book was "foreword by His Holiness the Dalai Lama". Yet the first thing a careful reader notices is that it is not true. The book's Foreword, all of three brief paragraphs, was actually written by Dalai Lama's secretary.
This, combined with other sales pitches, such as that the author "Tang Baiqiao is one of China's most influential modern dissidents", "Tang's name became legendary during the time of the Tiananmen Square Massacre", etc., -- overly exaggerations at best -- does not lend well to the credibility of the book itself.
Although signed in the form of "Tang Baiqiao with Damon Dimarco," the book takes a first-person singular tone to narrate the personal story of its main author Tang Baiqiao, who in 1989 was a college student in the remote Hunan Province and became a student leader there. The book covers Tang Baiqiao's experience growing up as a child in rural China, getting involved in the 1989 student movement, becoming a fugitive and then prisoner in the ensuing crackdown, and his eventual escape from China and his exiled life in America.
Tang Baiqiao's personal involvement in the 1989 student movement as retold in this book is surprisingly sketchy. In early April that year, he helped organizing a few student rallies and marches in his city and was elected to be the main leader there. In May, he took a trip to Beijing, hoping to connect with the movement leader there. The trip, as he frankly admitted in the book, was a failure. Other than participating in several marches, he did not accomplish anything there. So much so that he did not even become aware of the name of one of major student leaders -- he later thought Wang Dan was a name for a female student. By the time he returned to his home city in later May, the student movement had already petered out there.
But the book does provide a rare glimpse of the movement, and student life in general, far away from the capital city. In one amazing tidbit, Tang Baiqiao recalled being on the stage facing thousands of students chanting "Long Live Tang Baiqiao! Long Live Tang Baiqiao!" (P. 87) A scene never seen in Beijing.
Since the story is told in first-person, sometimes it is difficult to judge whether it is stating facts or mere perceptions of its main author at the time. For example, the book makes many careless statements such as "Fang Lizhi was also a close friend and adviser to Hu Yaobang" (P. 56) or "During his meeting with Gorbachev, Zhao Ziyang made it known that he was a puppet, nothing more." (P. 99).
My Two Chinas serves as an addition to the existing autobiographies of the movement participants such as Li Lu, Shen Tong, and Zhang Boli. It could be interesting to anyone who would like to learn about lives in that period in China from an individual perspective. But unfortunately there is not much information about the 1989 student movement here, nothing to justify the author's "legendary" status in it, at least.
Books About Tiananmen
Posted by Eddie Cheng at 8:35 PM No comments:

Fang Lizhi Recalls his Year as Refuge in American Embassy

The day after the Tiananmen Massacre in 1989, Professor Fang Lizhi and his wife Li Shuxian took refuge in the American Embassy in Beijing. The case soon became a focal point in the struggling Sino-US relationship.
Recently, Fang Lizhi wrote a three-part memoir in Chinese titled "The Sino-US Interplay in 1989-1990 as I Experienced" (see Parts A, B, and C). While there are no real surprises or major reveals from what we have already learned throughout the years, there are some interesting tidbits in the story: 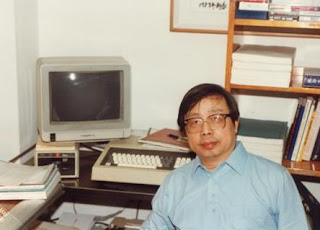 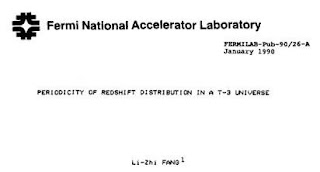 Issues of Tiananmen: Was there bloodshed INSIDE the Square

Throughout the night of June 3 to June 4, 1989, Beijing time, the entire world got a terrified and limited glimpse of what was transpiring in the streets of the Chinese capital thanks to (almost) live television. Tanks, Armored Personal Carriers, fully-armed soldiers with automatic assault weapons and clubs marched through dimly lit scenes like ghost figures, illuminated by battlefield flames in the distant background. Gunshots were heard too frequently and clearly, along with the chaotic screaming and shouting of victims. There was no question that a massacre was happening.
Historically, the event became named after its most recognizable geographic symbol: Tiananmen Massacre.
It was very unfortunate, as it drew attention to a place where massacre, in its literal meaning, did not actually occur. Instead, most of the killing (and wounding) happened in several main roads in the city leading to the square, but not inside the square itself.
The Telegraph reported today that "secret cables from the United States embassy in Beijing have shown there was no bloodshed inside Tiananmen Square," with the cables obtained from the famous Wikileaks. (The contents of the cable appears to be only based on a single Chilean diplomat's eyewitness account on the scene.) For the uninitiated, this may sound like a shocking piece of news. But it is actually a well-documented fact, sensational claims of "blood flowing like a river in the square" not withstanding.
The last chapter of my book, Standoff at Tiananmen, describes the mayhem of that night, based on many divert recollections and eyewitness accounts. The martial law troops killed hundreds, if not thousands, civilians as they advanced in the city, with the most killings happening on the West Chang'an Avenue in the west and Qianmen Avenue in the south. After they successfully surrounded the square itself, the troop actually halted their operation and allowed time for negotiations and a semi-peaceful and semi-organized withdraw of the remaining students.
The encirclement of the square, which was achieved around 1:30am that morning, appeared to mark a turning point in the military tactics. Before that, the army was ruthless and determined to achieve its strategic goal at any cost. They fired into crowd along Chang'an avenue at the outskirt of the square. One of the student leaders, Zhang Jian, was wounded there when he confronted an officer at point-blank range. He also witnessed death, according to his testimony.
But the troops did display patience, albeit limited, after they surrounded the square and established firm control. They did not advance into the square, where thousands of students still remain in the vicinity of the Monument of People's Heroes, until around 5:30. During those 4 hours, they used various tactics to scare most people into leaving the scene voluntarily. But most importantly, they negotiated and agreed to allow the remaining students withdraw peacefully.
It was not all peaceful, of course. There were indeed gunfires in the square itself. They were shot into the sky, either to destroy students' makeshift broadcasting speakers or to scare the students themselves. Many students later recalled the frightening and angry feeling when they saw sparks on the Monument of People's Heroes when it was hit by bullets. Some students who refused to withdraw were brutally beaten with boots and clubs. But nobody was killed in the process.
When the Chinese government spokesman Yuan Mu made the claim that "nobody had died during the final clearing of Tiananmen Square" in a press conference on June 6, the statement was widely interpreted as a categorical denial of the massacre as a whole and caused a world-wide uproar. Thus started the phony controversy of whether there was ever a massacre inside Tiananmen Square. It was as if the hundreds of deaths in the streets outside of the square were not enough.
To this day, there were no direct evidence of deaths inside the square, although indirect evidences indicate a few individuals might have fallen there. One of them was a student named Cheng Renxing (程仁兴), with second or third hand information indicating he was shot and killed under the National Flag Pole in the square.
Many have claimed that, when the army finally drove their tanks into the square and smashed everything on their way, there were still students sleeping in the tents. The account could not be verified. Before the tanks' advance, both student marshals and soldiers had separately swept the tent formation to make sure there were nobody in them. Indeed, a few students were found and led away from the tents.
Others claimed that they saw a large group of students refused to follow the withdraw formation and remained in front of the Mausoleum of Chairman Mao and were later gunned down en mass. No evidence had ever surfaced to corroborate this account.
It is perhaps the time to clarify, once and for all, that the term "Tiananmen Massacre" means a historical event, that happened in the city of Beijing during the night of June 3, 1989, as well as several days after, but not restricted to Tiananmen Square itself.
Posted by Eddie Cheng at 8:54 PM 1 comment: