Ge Yang has passed away this morning at a hospital in Flushing, New York. She was ninety-three years old.

Ge Yang, whose real name was Shu Peihua (树佩华), joined the Chinese Communist Party in her teenager years and had a remarkable career as a journalist during the revolutionary years. After the founding of the People's Republic of China, she served as the head of the Shanghai branch of the official Xinhua Press. Later, she was the editor-in-chief of the liberal magazine New Observer (新观察). During the anti-Rightists campaign and Cultural Revolution, she was relegated to perform manual labor for twenty one years.

On April 22, 1989, Ge Yang attended Hu Yaobang's funeral inside the Great Hall of People when thousands of students protested outside. She was deeply moved by the scene and wrote a poem:


One land is split
By a wall of brute force.
On one side lies an iceberg, chilling those who dwell there.
And on the other a warm-water sea.
Here lies Yaobang's body,
And there his soul.
From there we all came;
If there is no "there" there wouldn't be any "here."

Ge Yang left China in that May for a conference in America. Like many other intellectuals in that conference, she chose to remain in the USA as an exile after the massacre. She was interviewed for the documentary Gate of Heavenly Peace. She had been suffering from Alzheimer's disease and other health problems in recent years.
Posted by Eddie Cheng at 12:36 PM No comments:

January 17 this year is the fourth anniversary of Zhao Ziyang's passing. Ding Zilin, the founder of Tiananmen Mothers visited Zhao Ziyang's former home by herself and wrote about the experience.

Every year since Zhao Ziyang's passing, Tiananmen Mothers have organized group visits to his home, where a permanent memorial resides. Due to heavy police interference and harrassment, they decided to do it separately this year. Ding Zilin brought six red roses and four white roses, a symbol for Tiananmen Mothers, along with four white lilies for the anniversary. She was followed all the way but was allowed to enter the memorial and chat with Zhao Ziyang's relatives. Her flowers bore the signature of "Tiananmen Mothers" and was placed at the center of the memorial.

Signing in the visitor's log, Ding Zilin wrote, "Mr. Ziyang, you have left us four years, but you are still with us, for the same demands, the same destiny." 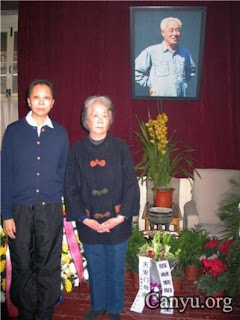 Posted by Eddie Cheng at 9:24 PM No comments: 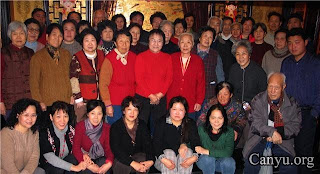 Since 1991, the Tiananmen Mothers, a loose group of parents and relatives of victims of the Tiananmen Massacre, have gathered for a dinner during New Year. The participants, which included only those in Beijing, have grown from three families back then to forty-two this year. In the twenty-year time span, eighteen of them have passed away without seeing justice for their loved ones.

Ahead of the twentieth anniversary of the massacre, the party was described as having less tears but more encouraging words and spirits this time.
Posted by Eddie Cheng at 9:07 AM No comments:

Twenty years ago, the year 1989 came with a slew of conspicuous anniversaries which inspired Professor Fang Lizhi's open letter to Deng Xiaoping and the later student movement. The same anniversaries fall into this calendar year, with another twenty years added to them:
Of course, another significant one has to be added this time around:
There has not been much chatter about the French Revolution or May Fourth Movement this time around, although the anniversary of the 1989 seems to be in many people's mind. On Internet forums inside China, cleverly designed posts appear here and there trying to reminding audiences of the anniversary without explicitly running into automated censorship. They are usually followed by knowing comments.

The budding "movement" of Charter of 08 seems to have stalled with its main leader Liu Xiaobo still detained. Liu Xiaobo's wife was recently allowed to meet him briefly at a "neutral location" and told that Liu Xiaobo was not formally arrested. All other participants who had been detained or called in for questioning one way or another has been released. It looks like the government is being cautious in how to nevigate through this sensitive Spring-Summer season of political minefiled wihtout major incidents.

The economy is not helpful either. Hampered by the global recession, the manufactary sector in South China, long the engined of China's "peaceful rising", is in collapse. Unemployment is rising fast and spontaneous mass protests are becoming a common occurances in small cities. Twenty years ago, it was the rampant inflation and corruption that had helped feuling the popular support to student movement.

Meanwhile, the government is preparing for a major celebration of the 60th anniversary of the People's Republic, in which the mighty military will once again march through Tiananmen Square. The last time a celeration of this kind was done is way back in 1984, which was a joyous occasion for Deng Xiaoping. Partyly due to Tiananmen Massacre, it has been staged for a quarter of century.

May we live in interesting times.
Posted by Eddie Cheng at 10:22 AM No comments: