A New Group Prepares for the Anniversary of Tiananmen

A new, unnamed group has recently unveiled a web site calling for a commemoration of the twentieth anniversary of Tiananmen Massacre on Saturday, May 30, 2009, at the Washington Monument in Washington, DC.

The group identifies itself only as "a small group of oversea Chinese who have met and become friends through an internet forum" and not associated with any established organizations.

The web site hosts a forum with few articles available and is calling for donations and volunteers.
Posted by Eddie Cheng at 10:24 PM No comments:

Experiencing the Great Firewall of China

Firefox is known for many of its add-ons, which provides all kind of enhancements in user experiences. Yet rarely an Add-on shows up to actually degrade it. The China Channel add-on does exactly that:

The Firefox add-on China Channel offers internet users outside of China the ability to surf the web as if they were inside mainland China. Take an unforgetable virtual trip to China and experience the technical expertise of the Chinese Ministry of Information Industry (supported by western companies).

Read a more detailed description of this add-on at Webware.
Posted by Eddie Cheng at 7:43 PM No comments:

How the Other Tiananmen Incident was Overturned

Before June 4, 1989, there was the "Tiananmen Incident" of April 5, 1976, also known as the April Fifth Movement. During that time, thousands of Beijing residents gathered at Tiananmen Square to commemorate the late Premier Zhou Enlai, who had passed away a few months ago. The spontaneous display of emotion was met by brutality of the government, who used clubs and heavy boots to disperse the crowd and later persecuted the active participants they had identified.

Wang Juntao was only 15 years old at the time. He was sent to jail for having organized his high school class to the Square and posted three poems he had written. Chen Ziming escaped arrest by returning to his forced-labor farm, where he was already serving a sentence for expressing dissident opinions in private letters.

The verdict of that "Tiananmen Incident" was overturned in 1978 after Deng Xiaoping regained his power. A recent article in China Newsweek recalled the moments when the "Incident" became the April Fifth Movement. Wang Juntao and Chen Ziming, along with other young leaders, were then hailed as national heroes.

Xujun Eberlein at Inside-Out China added her own experiences and observations of these events.
Posted by Eddie Cheng at 9:28 PM No comments:

The human rights activist Hu Jia, who had previously been rumored for the Nobel Peace Prize, was chosen for the Sakharov Prize by the European Parliament. Hu Jia is currently serving a three and half year prison term for sedition charges.

Before the selection, the Chinese government had unsuccessfully asserted pressure on EU, threatening damanges to the Sino-EU relationship.
Posted by Eddie Cheng at 8:59 PM No comments:

An Open Letter Appealing for a Convicted Murderer

Three months ago, a 28-year old was arrested in Shanghai for suspicion of possessing a stolen bicycle. The suspect, Yang Jia (杨佳), received no official sympathy when he sued for police brutality during his detention. So, the young man took the matter into his own hand and attacked a police office with a knife, killing six unarmed policeman.

On his trial, Yang Jia did neither deny nor repent on his murdering act. He made it clear that his action was a revenge of the injustice he had received. The case has received much public coverage in Chinese media and internet, where Yang Jia was often hailed as a hero for standing up to the inhuman police force in China. Yang Jia, on the other hand, was sentenced to death as expected.

During the last couple of days, an open letter has been circulating on Chinese internet appealing for a special amnesty for Yang Jia. The letter was initially cosigned by fourty six scholars, artists, lawyers, and other citizens. The letter argued on Yang Jia's behalf alternately from criticizing police brutality to denouncing death penalty as an act of cruelty itself.

This open letter appealing for amnesty is a faint echo of the letters in the early spring of 1989, when scholars cosigned open letters appealing for amensty for Wei Jingsheng and other political prisoners. Indeed, it has been rare, if ever, to see a citizen action such as this since the days of 1989.

Among the original sigatures of the current open letter are at least two names who had deep involvements in the 1989 movement: journalist Dai Qing and scholar Zhang Lun (张伦). Other signataries include the famous legal scholar Yu Haocheng (于浩成) and outspoken artist Ai Weiwei (艾未未).

More signatures are still being collected for the letter.
Posted by Eddie Cheng at 8:41 PM No comments:

A T-shirt Designed for the Coming Anniversary

The twentieth anniversary of the 1989 student movement is now just months away. Plans of commemoration for this occasion are being initiated in many places. In what termed to be from inside of China came a design for a commemorative T-shirt: 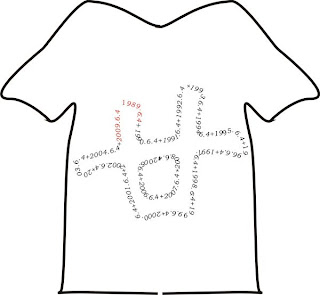 It's a fairly simple design. The figure is made by the anniversary dates for June 4, from 1989 to 2009. Together, they trace the shape of a character meaning "twenty" in Chinese. The initiator in the blog page calls for people to make the shirts locally and wear them in public on the day of the twentieth anniversary, as a form of performance art.

The T-shirt is currently available for purchase at Taobao, the eBay of China.
Posted by Eddie Cheng at 7:51 PM No comments: 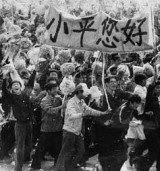 Danwei translated a recent interview by The Beijing News with a student who had masterminded the banner in 1984 and a reporter who took a picture of it and got it published in the official press. It was a nice piece of time capsule for a brief and happy moment in history.
Posted by Eddie Cheng at 8:49 PM 1 comment: