Former 1989 Chinese student leader Wuer Kaixi today announced through his Facebook page that he will become a candidate in the regional representative election in Taiwan.

In his statement, he recalled the route he took in travelling to Taiwan after his exile from mainland China and eventually settling there. He says that he now feels that he is a "full Taiwanese" and it is time for him to contribute in the democracy of  that society.

He did not specify which party he will be affiliated to. The statement sounds like he will be an independent candidate.


Later on 12/26/2014, Wuer Kaixi announced that he has decided to withdraw from this round of regional elections, citing time constraints, but focus on a future candidacy in the 2016 national election instead. 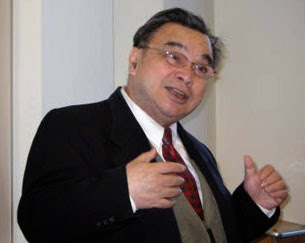 Cao Siyuan was born in 1946. In the early 1980s, he had already become a prominent intellectual within the government and very active in the reform effort. In 1985, he spearheaded the effort of drafting and passing the very first bankruptcy law in the country still dominated by state-owned, centrally planned economy.

By 1989, he had left his government position and become a consultant on entrepreneurial finance and bankruptcy issues. He was also part of think tank in the Stone Corp. At the latter stage of the movement, he was the driving force behind scenes to get the Standing Committee of the National People's Congress involved in resolving the conflict. He lobbied Hu Jiwei and eventually collected 46 signatures from the Standing Committee members in Beijing on a petition for an emergency meeting of the committee. Although it more than met the legal requirement, the meeting did not take place.

Because of his effort, Cao Siyuan was among the few intellectuals arrest in early June, even before the massacre. He stayed in jail for about a year.

After his release, he continued his consultation work in the merge and acquisition area as well as bankruptcy. He is also active in pushing for constitutional reforms.

A museum dedicated to the Tiananmen Massacre, the only one of its kind, in Hong Kong. The museum has its own official web site.

The museum is fairly small in size. Most of the exhibits are texts and pictures of the 1989 student movement. There is little actual artifacts from the event available, however.

Visitors pay a nominal fee to enter the museum. Picture-taking is allowed. Miniatural replicas of Goddess of Democracy, as displayed on the bookshelf above, are available for purchase as souvenirs.


View Larger Map
The museum is housed in a residential-commercial building with no clear sign outside: 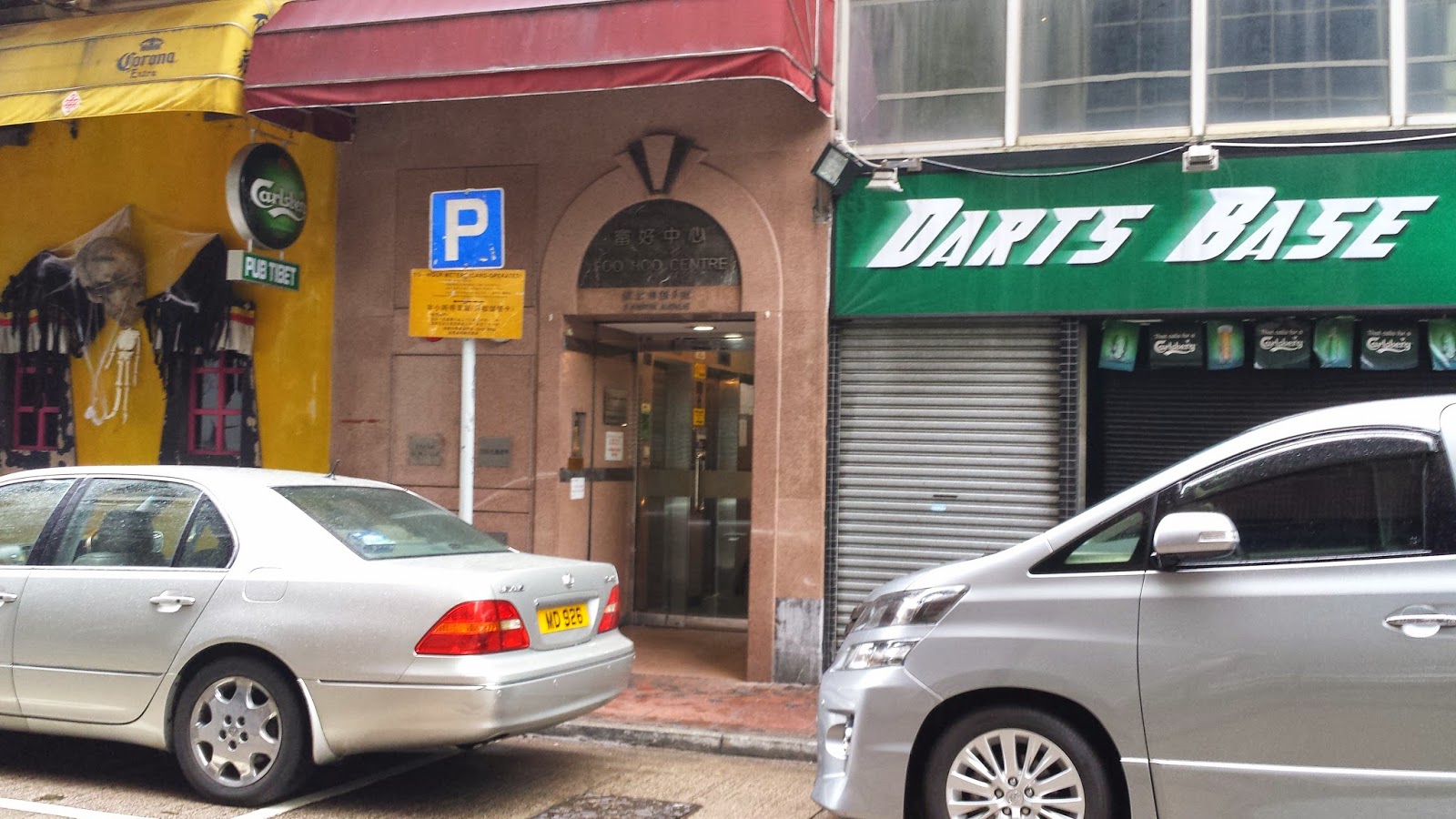 The museum was established by the Hong Kong Alliance in Support of Patriotic Democratic Movements in China in 2012. Before moving into this permanent location in 2014, there were two separate temporary locations.

A statue at the Chinese University of Hong Kong: 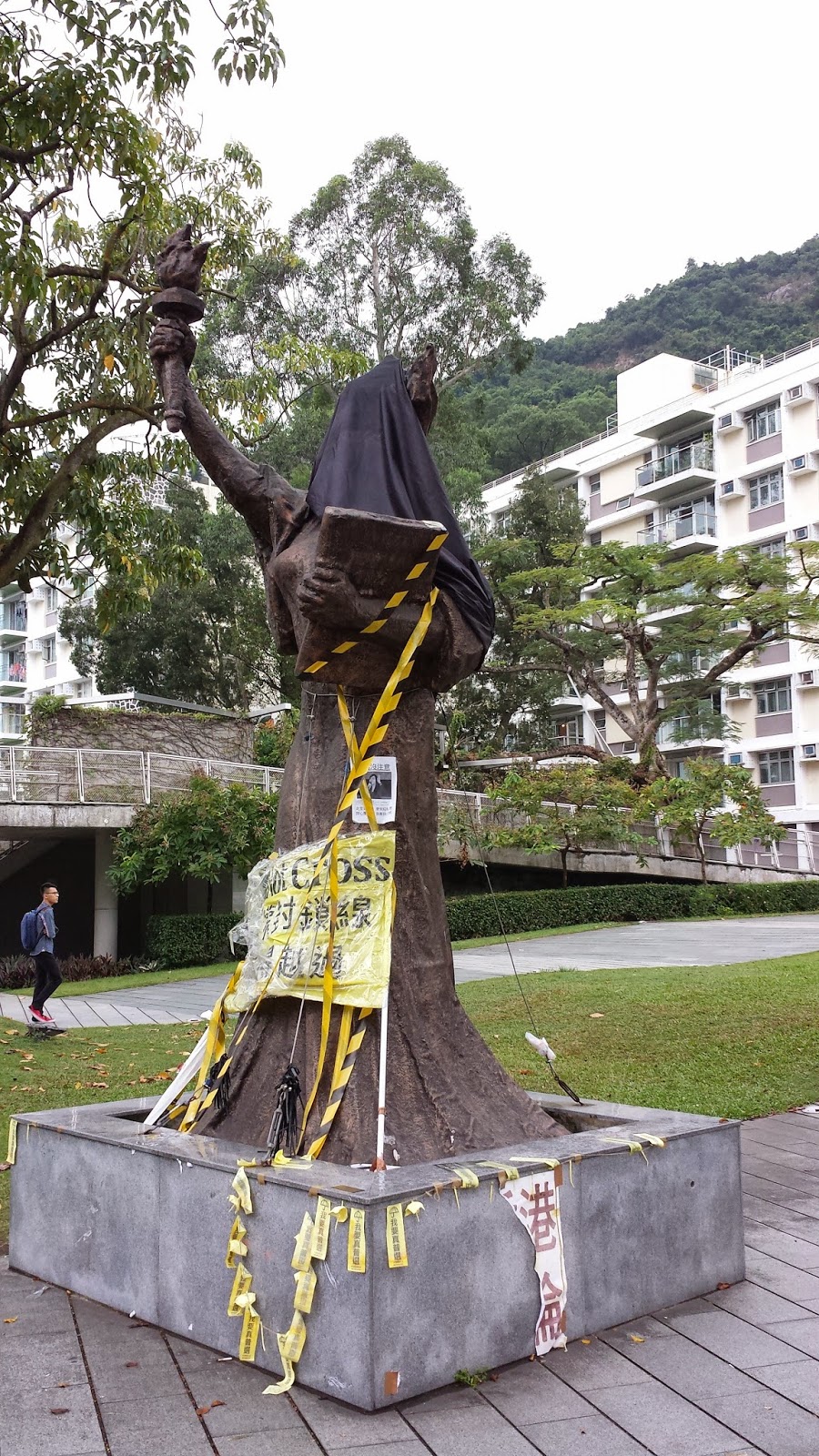 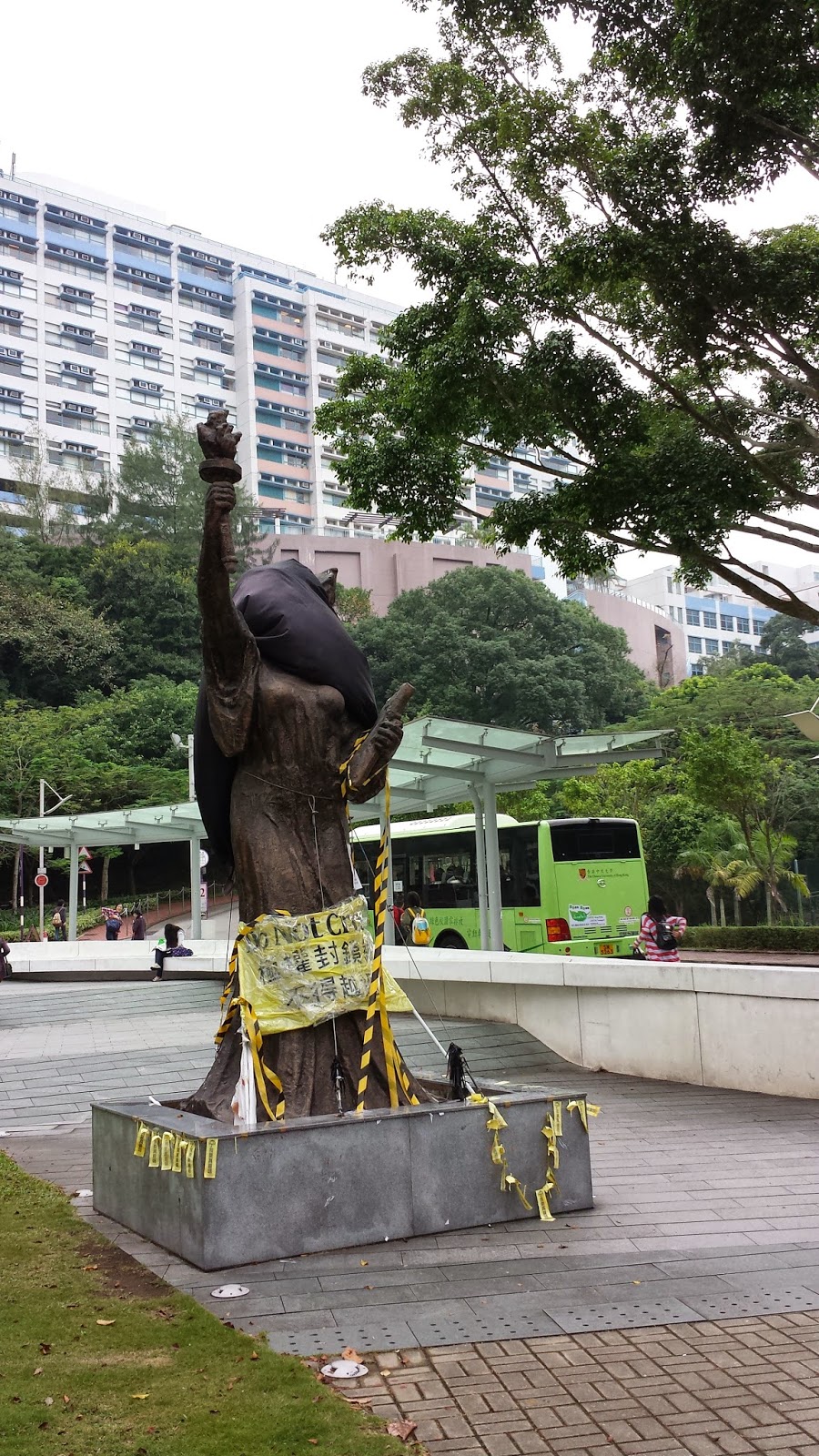 The above pictures were taken on November 7, 2014, when Hong Kong was in the middle of the "Umbrella Revolution" protests. The statue was covered by protesting artifacts at the time. A clearer picture of this statue can be seen here. 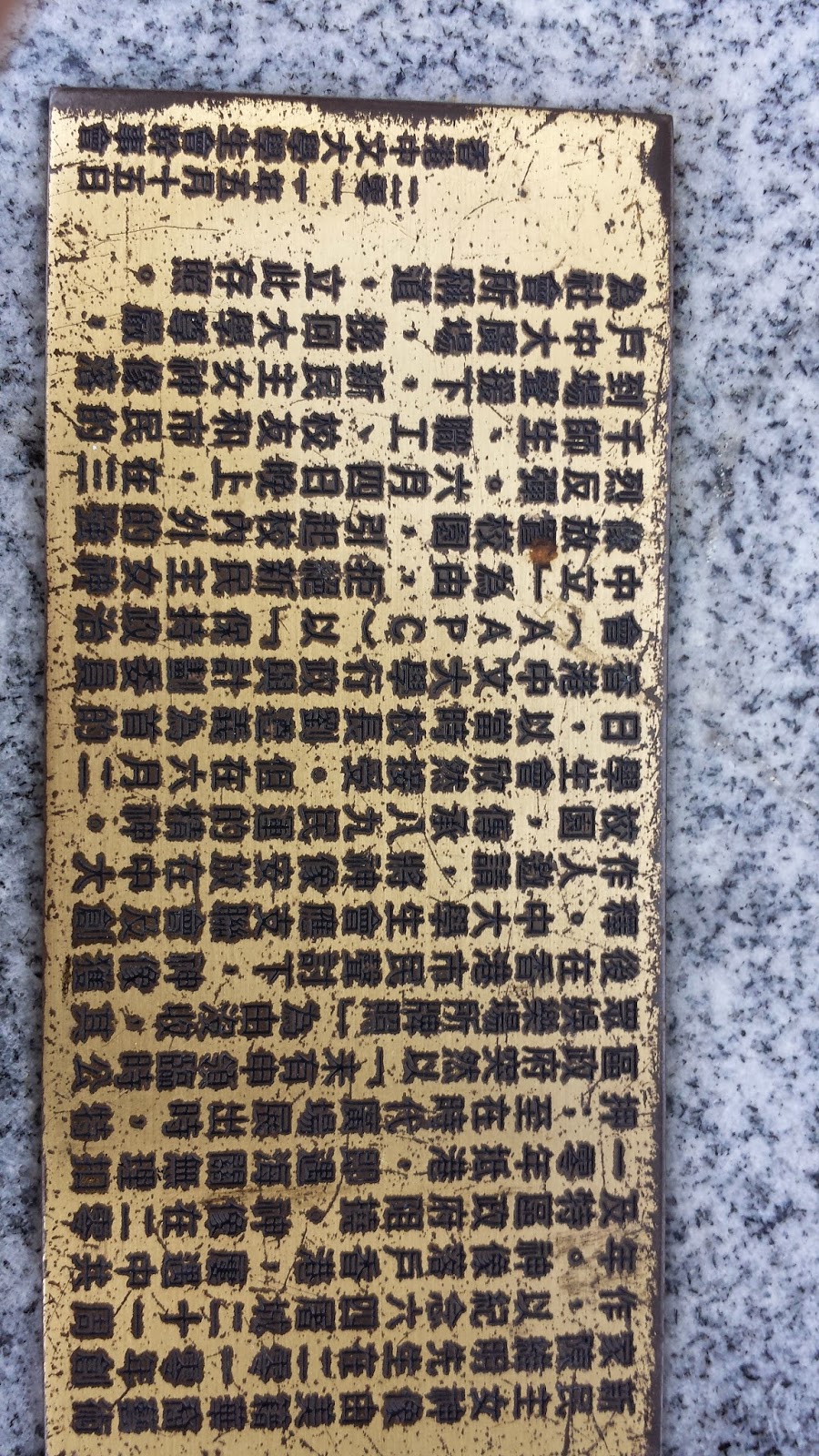 A metal with inscription on the pedestal explains its origin and history.


The statue is right outside of the MTR's University Station, at the entrance of the University.

According to the wikipedia entry and the inscription above, The statue was created by the American artist Chen Weiming (陈维明) in 2010. After arriving in Hong Kong, it was first exhibited at Hong Kong's Times Square and was temporarily seized by the police.

Overcoming objections from the school, the Student Union at Chinese University of Hong Kong was able to provide a permanent home for the statue at its current location. 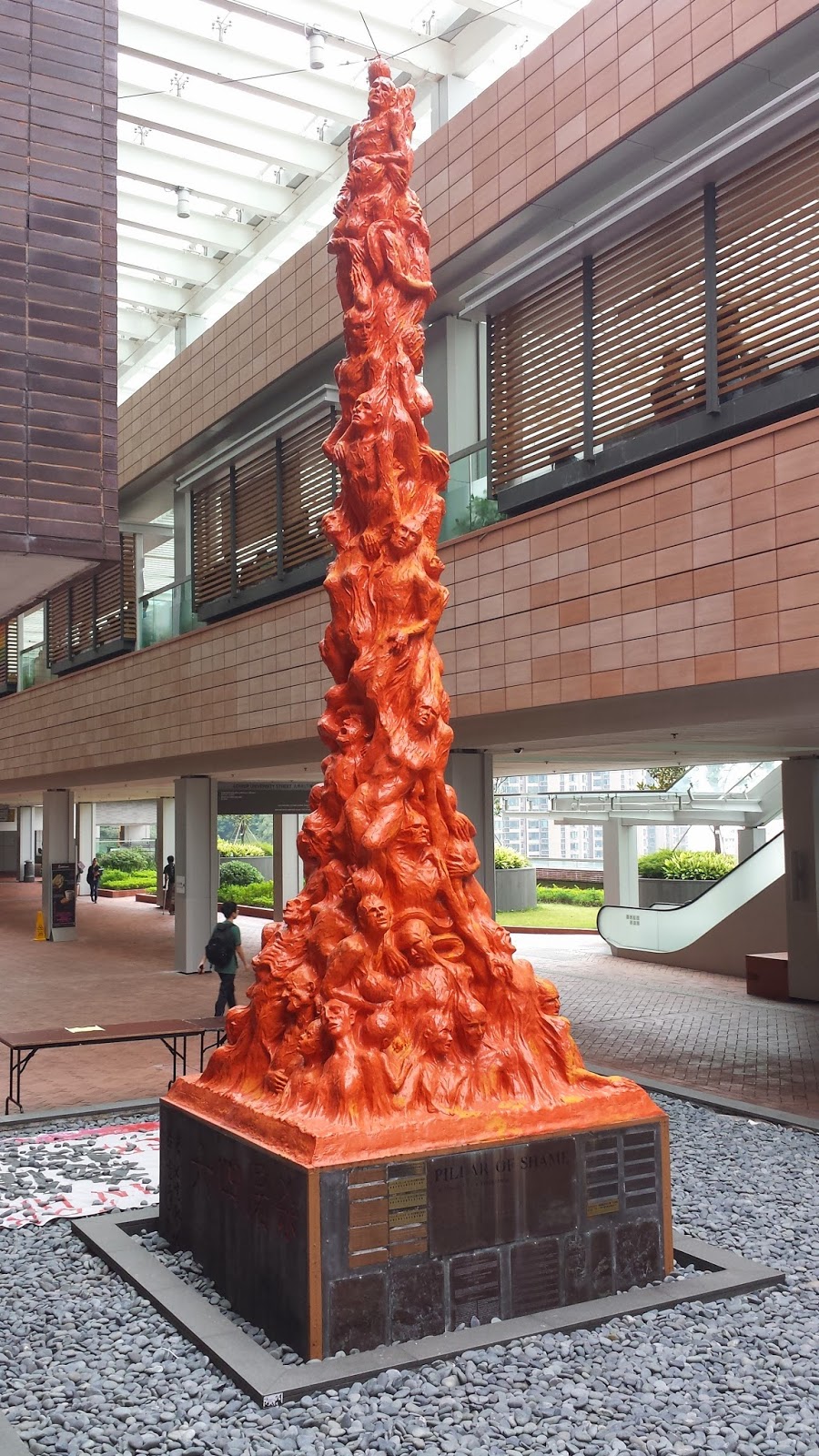 The four sides of the pedestal have different inscriptions:

The above pictures were taken on November 6, 2014.

The sculpture is placed right in front of the student union building.

According to Wikepedia and the inscriptions, this sculpture is one of a series created by Danish artist Jens Galschiot. It was originally exhibited in Victoria Park in 1997 on the eighth anniversary of the massacre. Later, it traveled through various universities in Hong Kong until 1998 when the Hong Kong University Student Union adopted it in its current home.

The current orange color of the sculpture was painted in 2008 by the Hong Kong Alliance in Support of Patriotic Democratic Movements in China in 2008 as part of the Color Orange initiative. 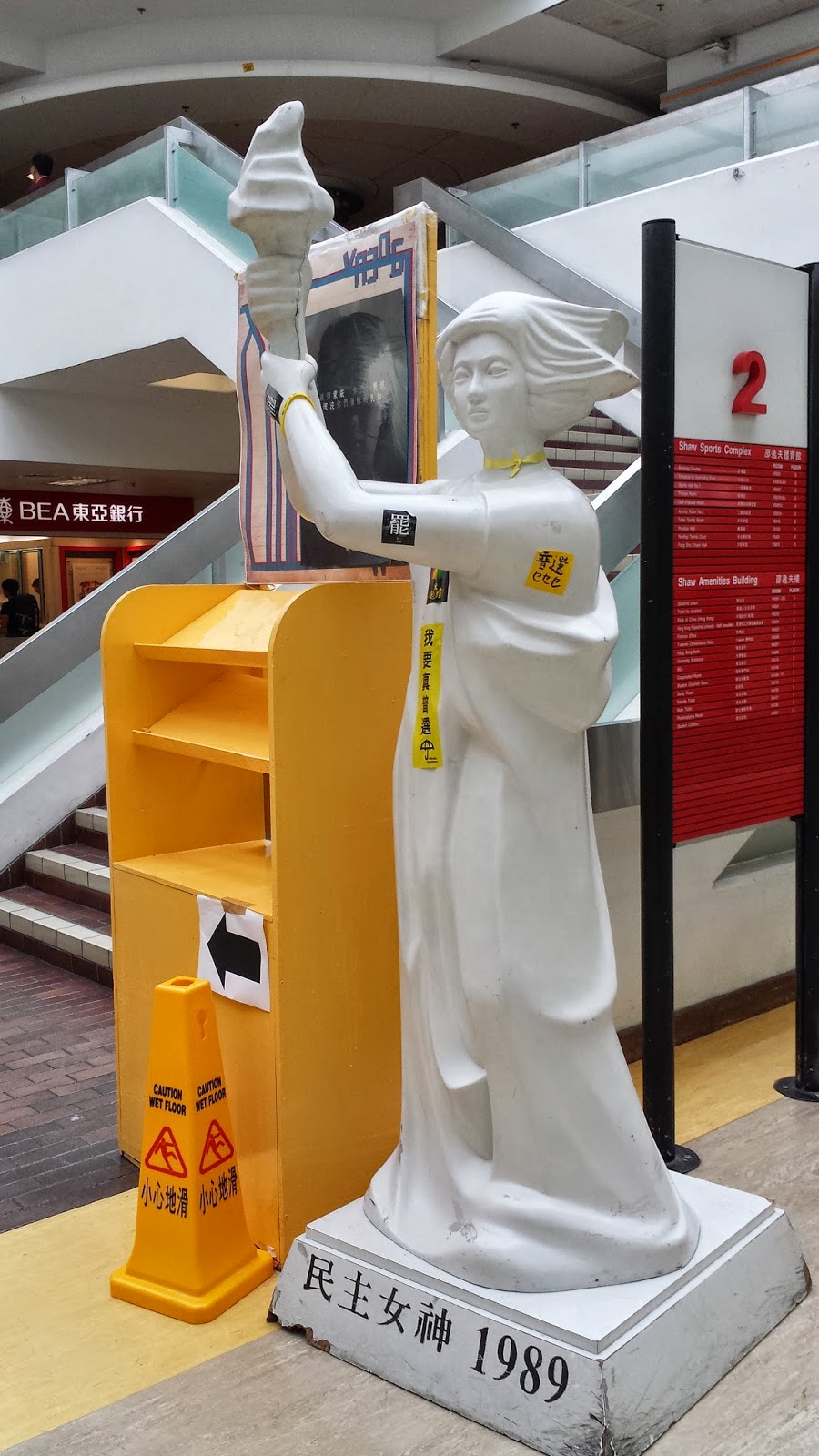 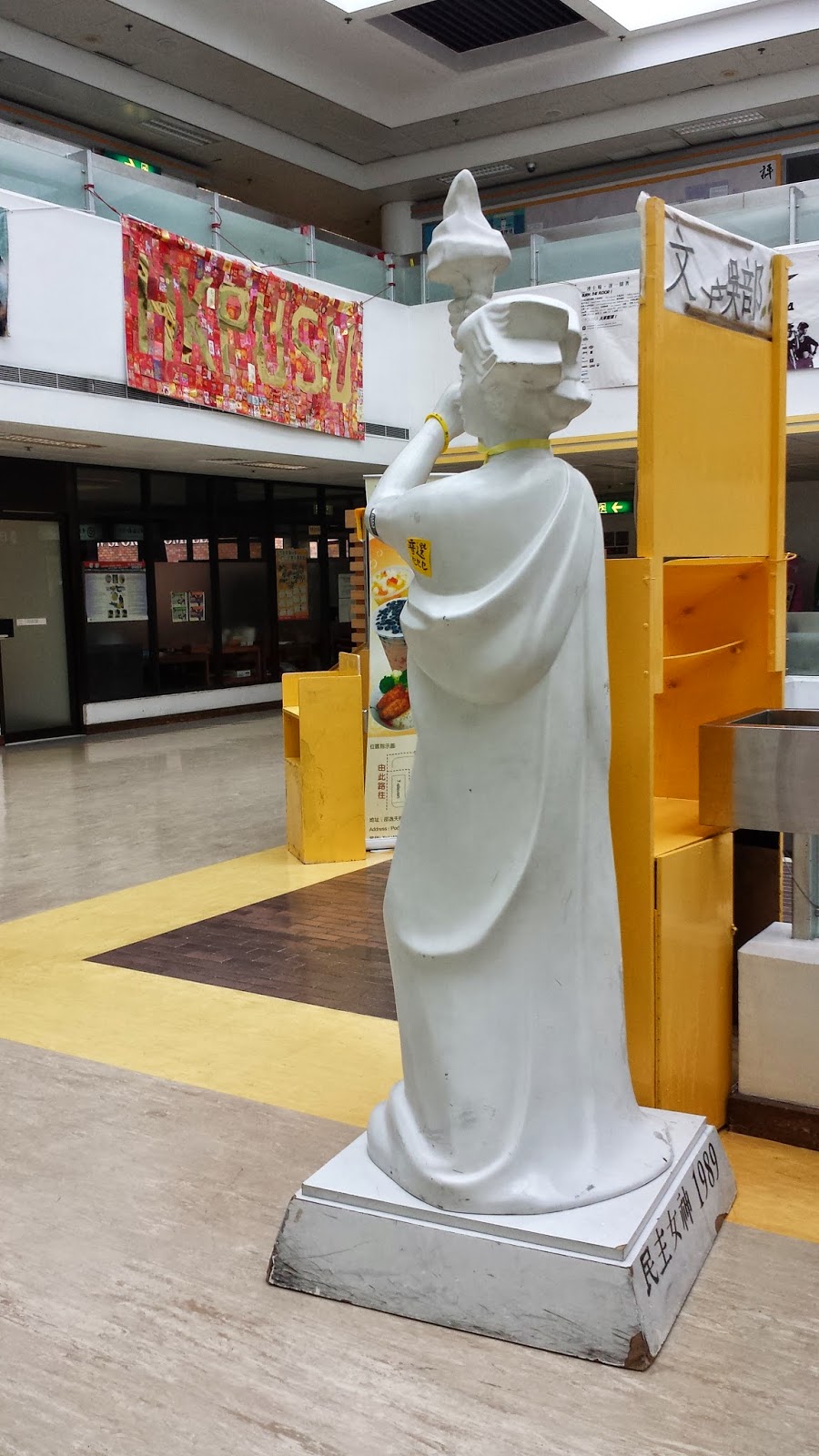 This is a fairly small and simple replica. The pedestal has the Chinese inscription "Goddess of Democracy" along with the year "1989" inscribed.

These pictures were taken on November 7, 2014, when Hong Kong is in the middle of the "Umbrella Revolution" protests. A couple of protest banners were attached on the statue.

The statue is housed inside the Shaw Amenities Building at the center of the campus. It is casually placed by the stair way on the first floor. 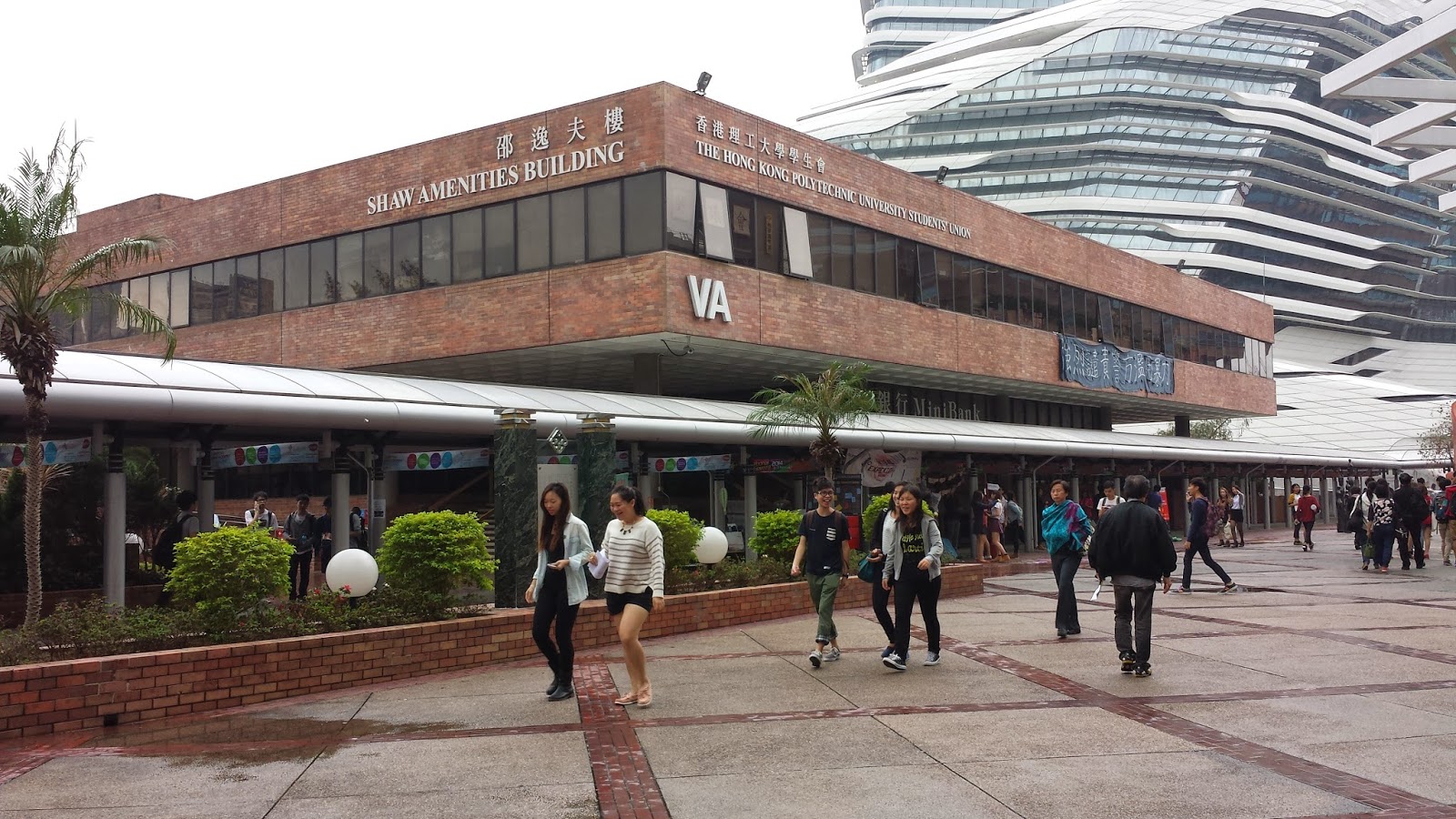 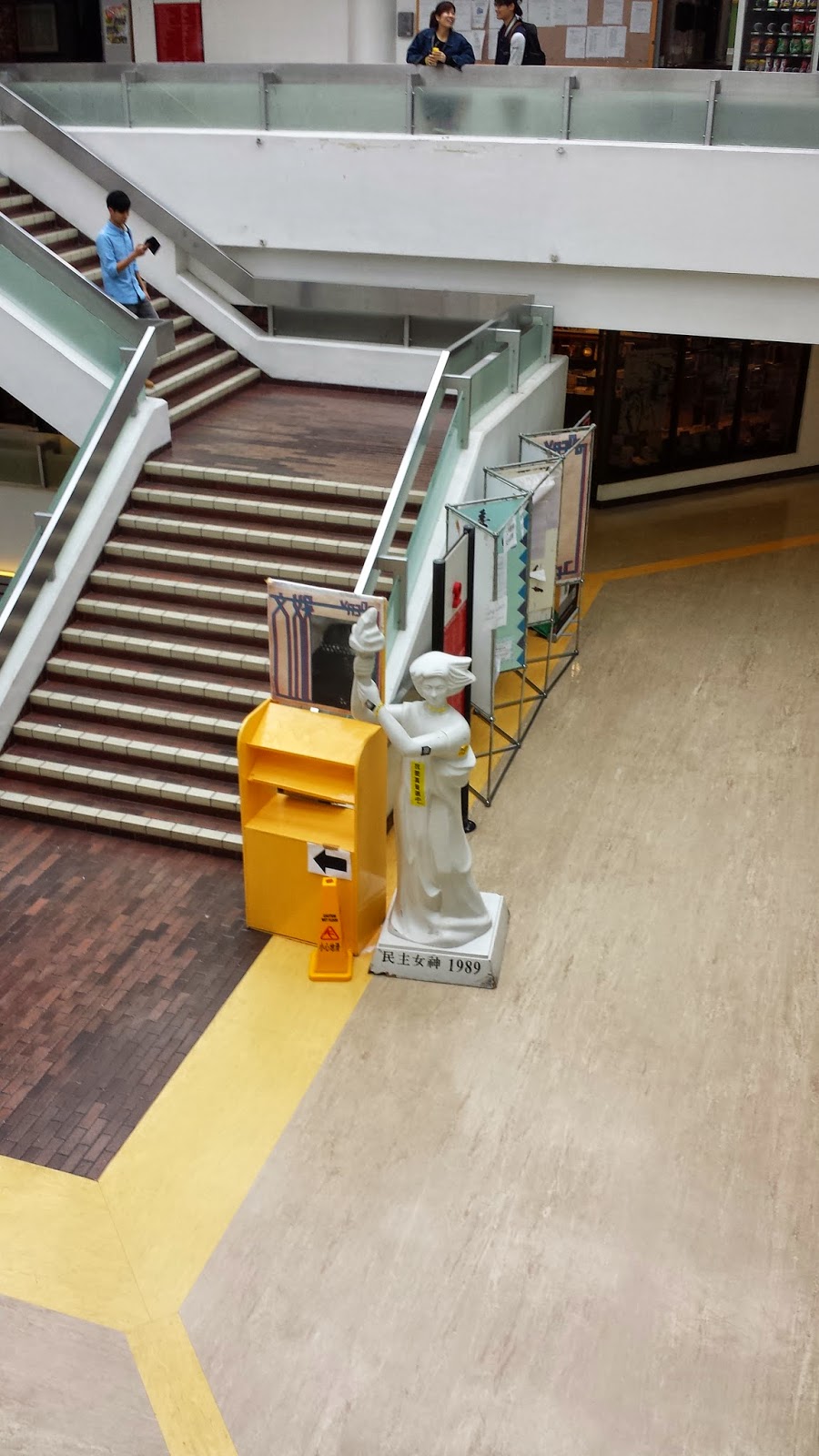 The building also houses the student union. There is also a piece of artwork depicting the Goddess nearby: 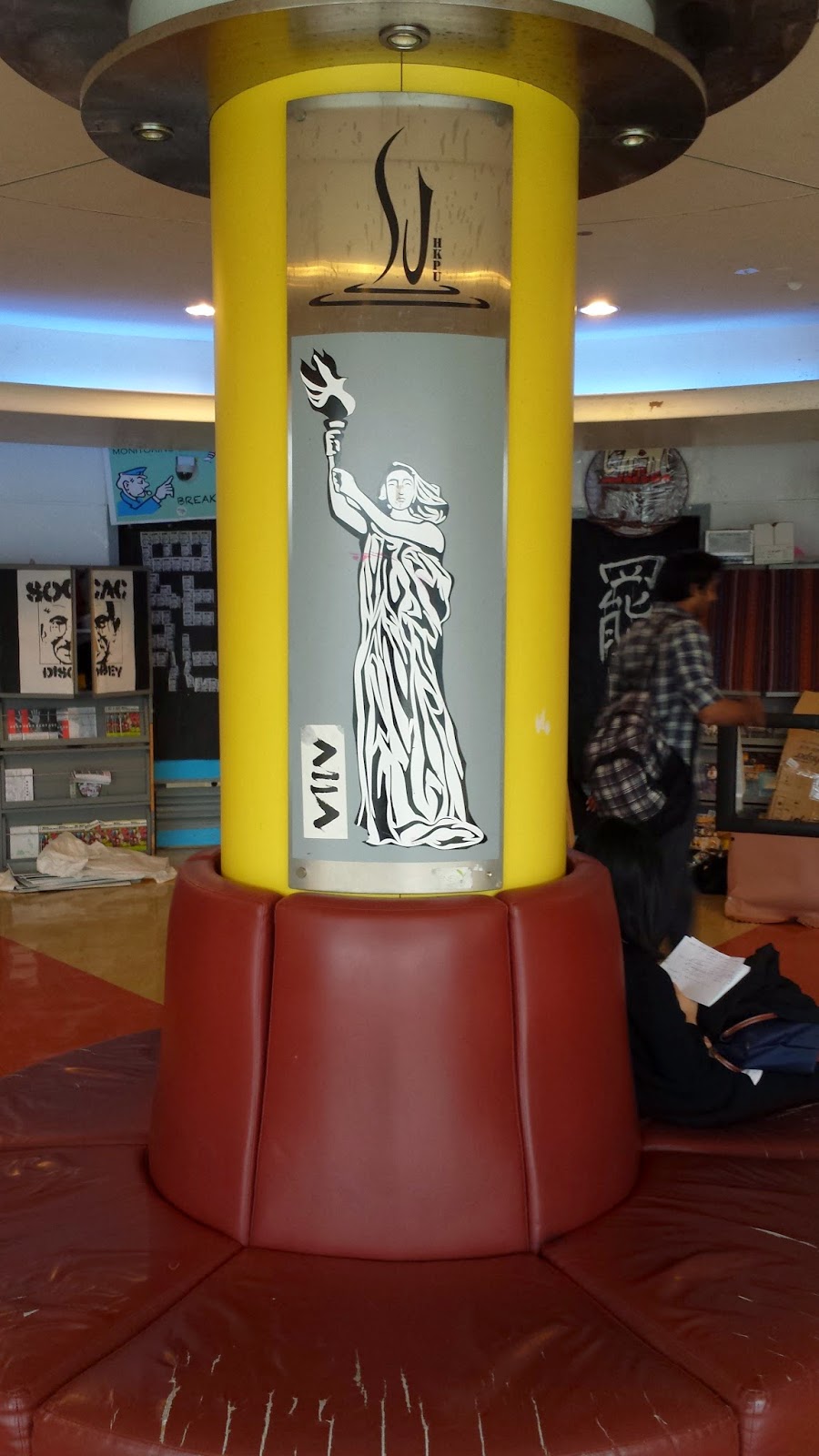 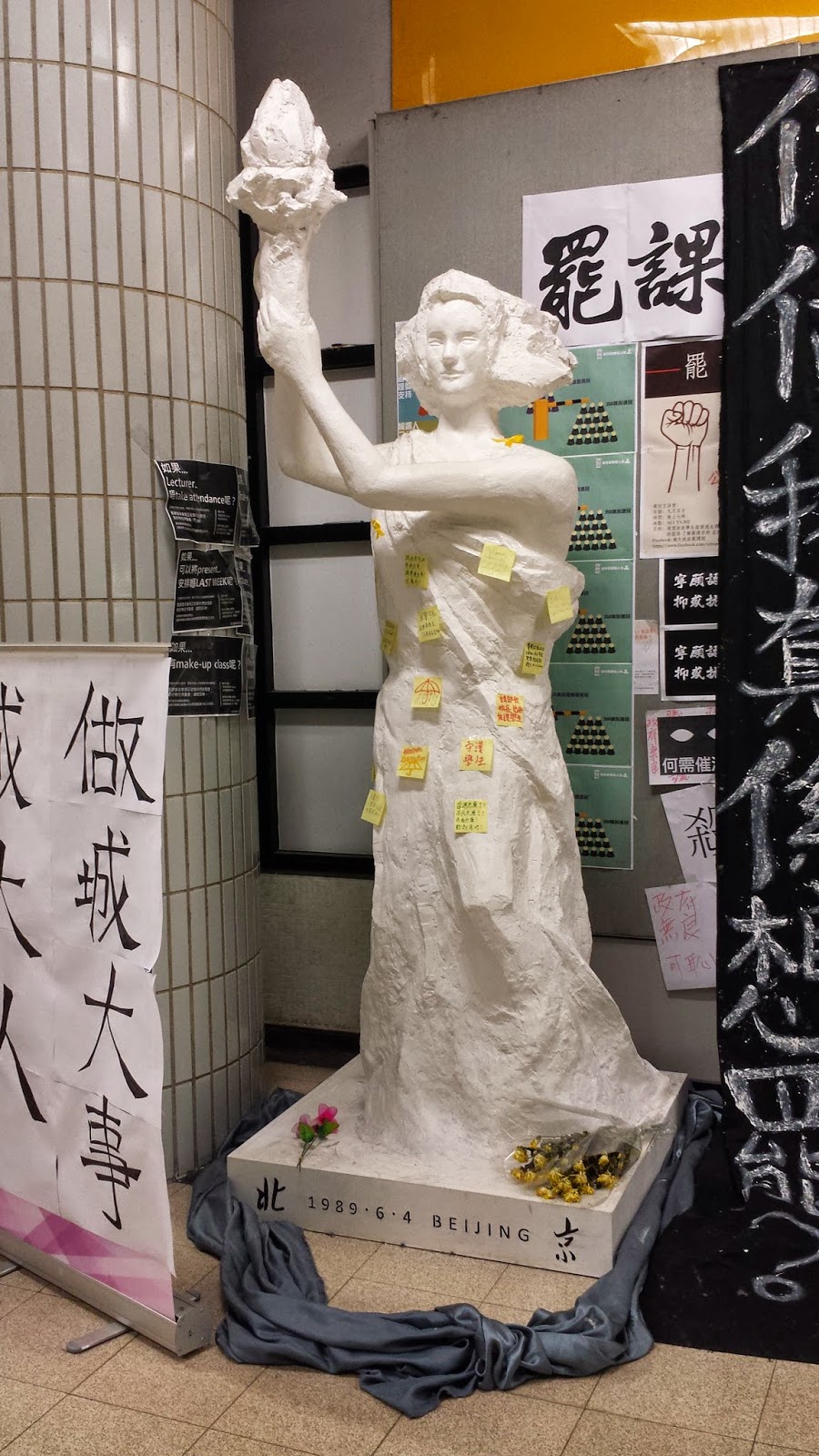 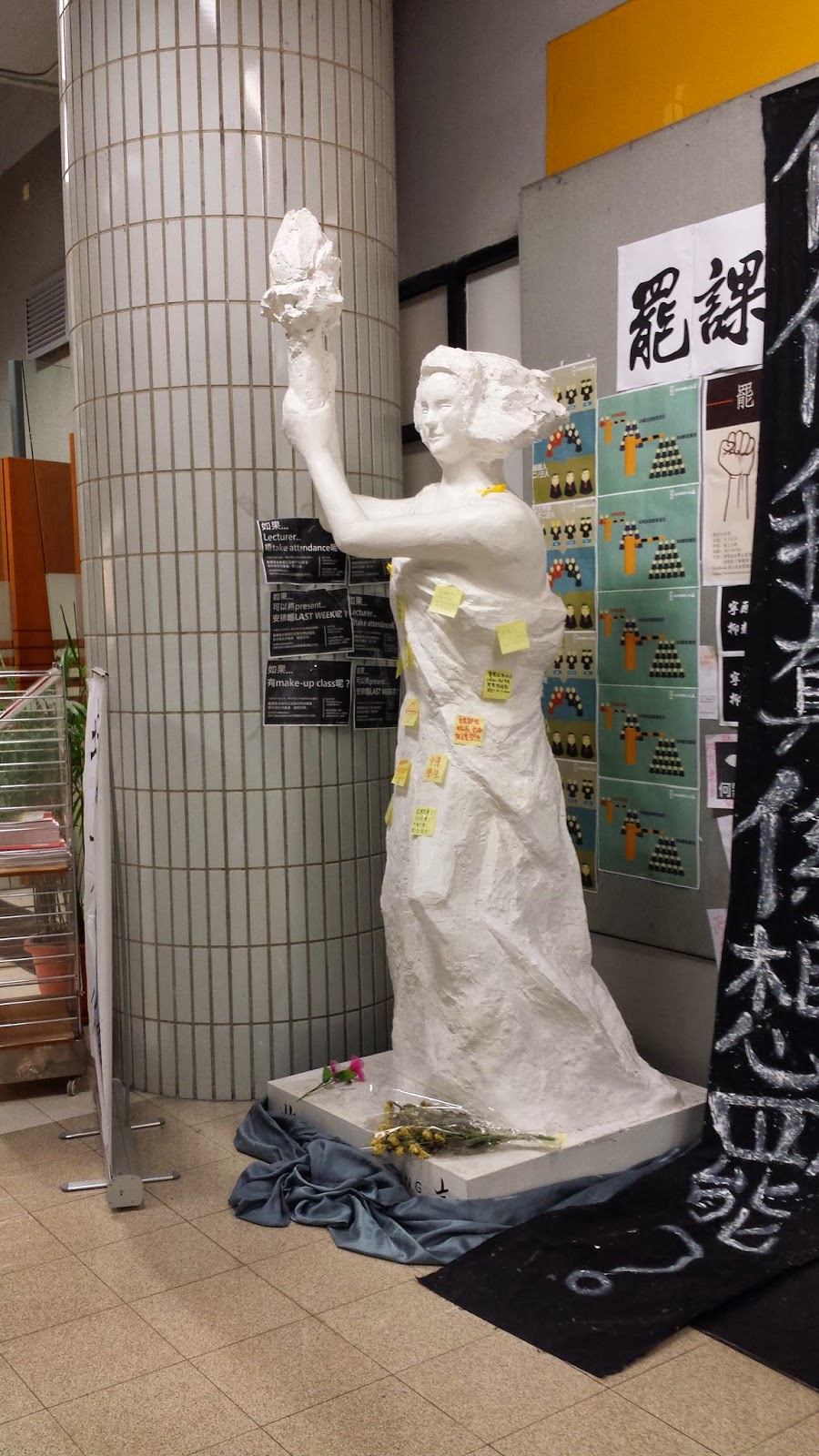 It is a relatively simple and small replica. At the bottom pedestal, the words "1989 - 6 - 4 BEIJING" is franked by the Chinese characters for Beijing.

The above pictures were taken on November 7, 2014, when Hong Kong is in the middle of the "Umbrella Revolution" protests. Calls for class strike and protest banners and notes are placed on and around the statue at the time.

The statue is housed inside the huge Academic Building 1, on the third floor, of the university. It looks casually placed in a corner between the Run Run Shaw Library entrance and the main student bulletin board: 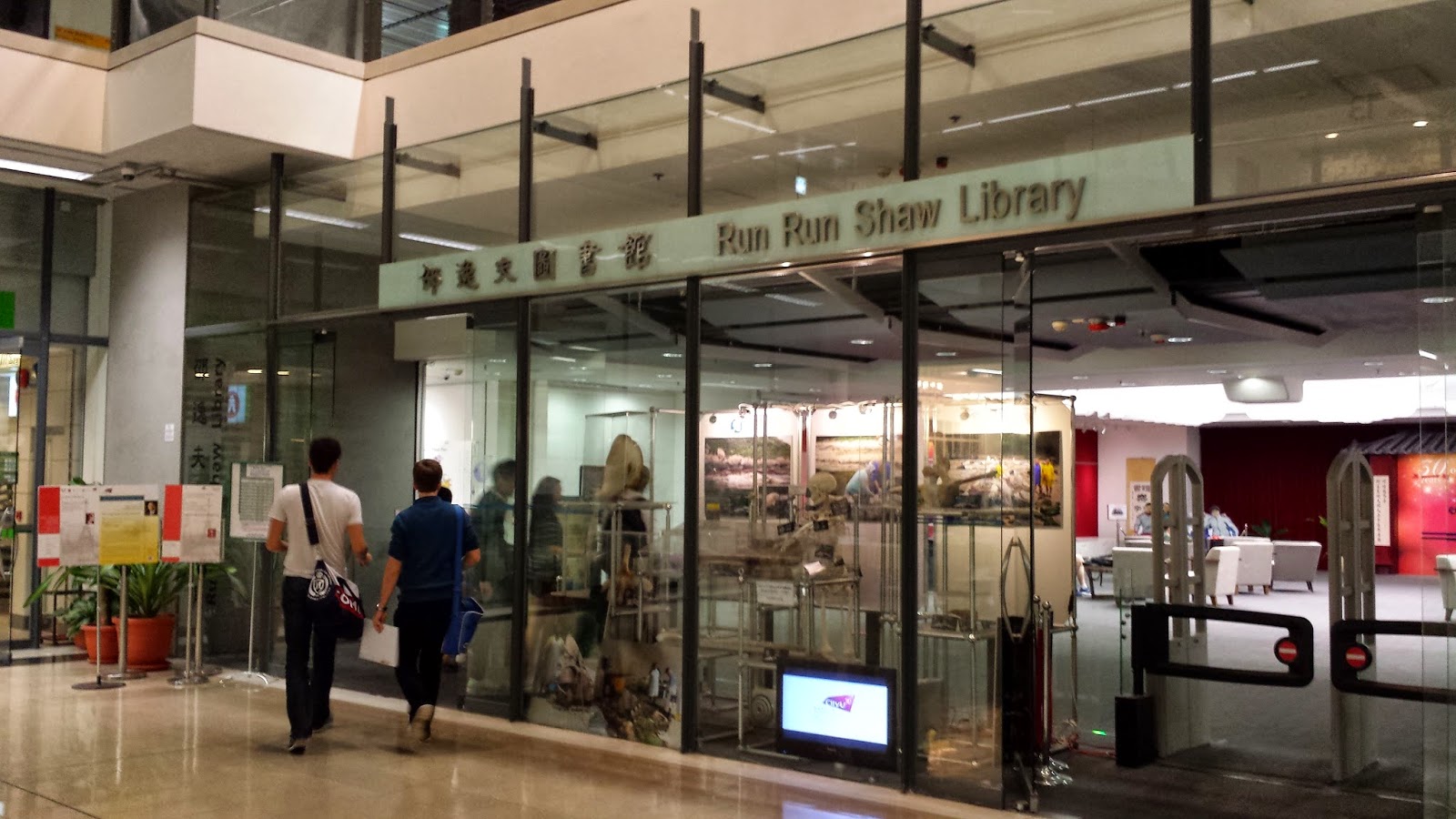 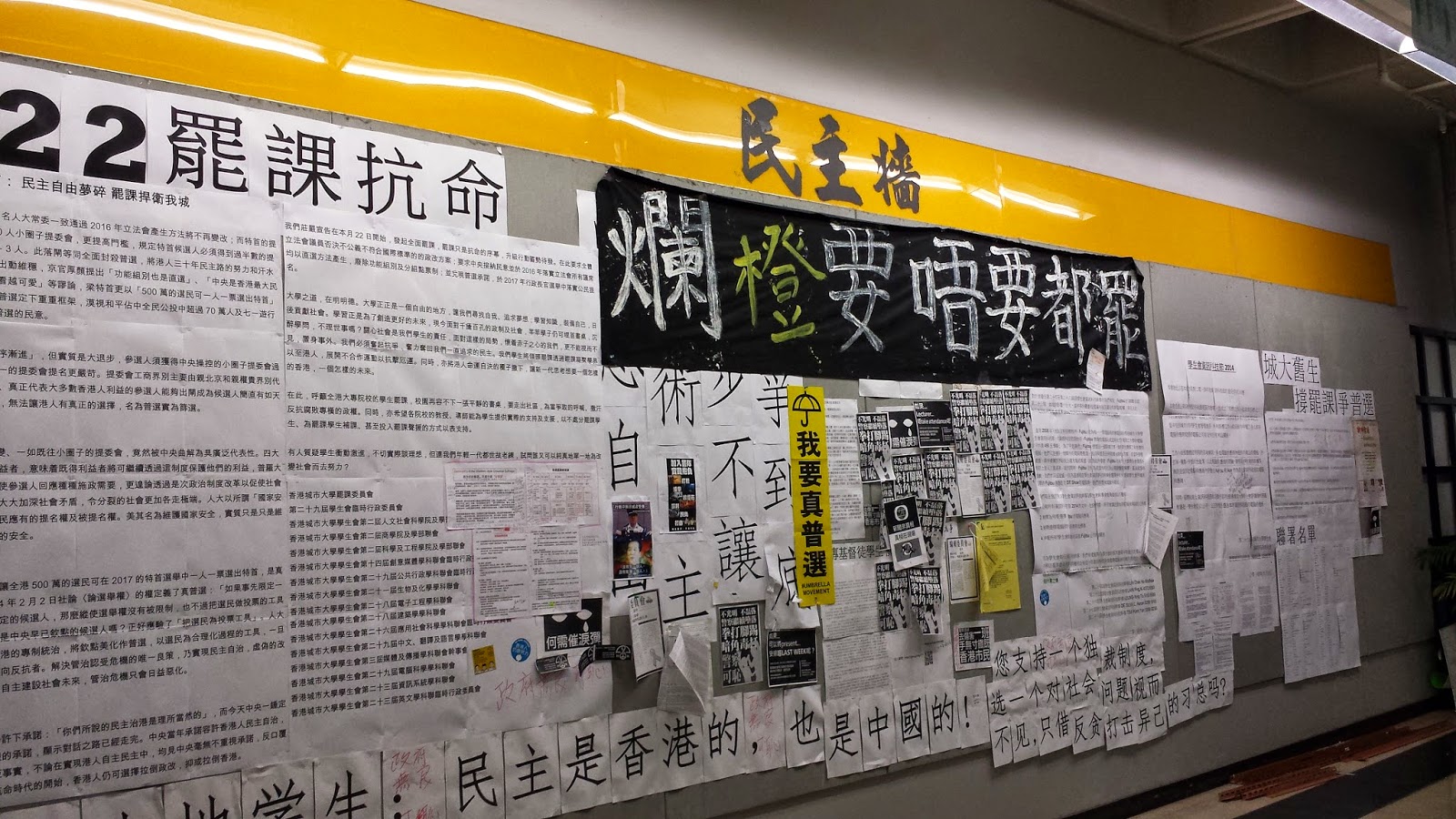 During the annual anniversaries of the Tiananmen Massacre, the statue would be temporarily placed in a more central and prominent location for tributes.

For the first week of November, former 1989 Chinese student leader Zhou Fengsuo (周锋锁) joined in the Occupy Central movement in Hong Kong, demanding a "real popular election" of the chief executive of the local government. 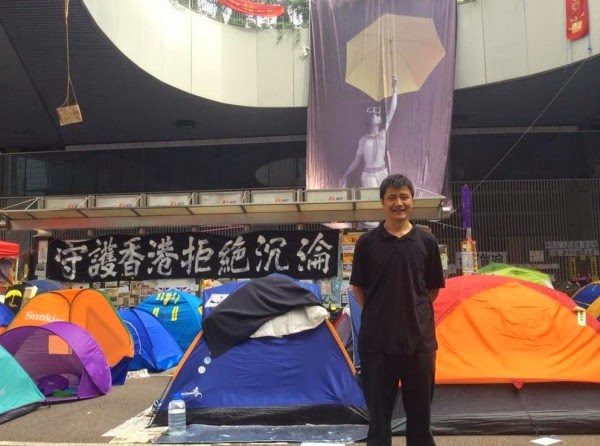 Zhou Fengsuo spent most of his time at the Admiralty occupation site, crashing in a tent for 7 days. As the first and so far only significant figure from the 1989 generation in this movement, he received considerable interest in the local media, resulting numerous interviews and reports. He also gave public speeches and held many discussions with the Hong Kong student leaders.

Sometimes emotional, Zhou Fengsuo expressed his appreciation of the Hong Kong movement for giving hope to China as well as allowing him to relive the days of Tiananmen.