Li Lu Is In China

Two of the richest people in the world, Warren Buffet and Bill Gates, are currently in China on a high profile business/philanthropy visit. Not all of this trip is high profile, however. A decidedly low key aspect of their trip is that their delegate includes Li Lu, former student leader and one of the 21 "Most Wanted" by the Chinese government for 1989 student movement.
Li Lu was recently reported as a possible successor to Buffet's financial empire. He was instrumental in introducing Buffet (and Gates) to BYD, an emerging battery and auto maker in China. As Buffet and Gates toured BYD in Shenzhen, Li Lu was among them.
A reporter for Hong Kong newspaper Ming Daily describes the scene as highly controlled. Reporters are allowed to photograph Buffet but not his entourage. But Li Lu could still be spotted. The newspaper said that Li Lu entered China with an American passport with special permission by the Chinese authority.
Another Hong Kong newspaper, Apple Daily, actually managed to publish a photograph with Li Lu in a photo-op with BYD managers. 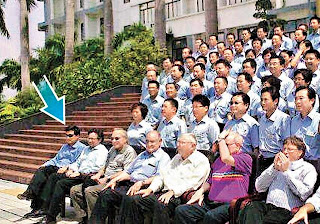 This is the very first confirmed case that one of the 21 Most Wanted student leaders who have escaped abroad is allowed to visit his home country.
Posted by Eddie Cheng at 9:40 PM No comments:

As in Czechoslovakia in the 1970s, the response of the Chinese government was swift and brutal. Dozens if not hundreds of signatories were called in for questioning. A handful of perceived ringleaders were detained. Professional promotions were held up, research grants denied and applications to travel abroad rejected. Newspapers and publishing houses were ordered to blacklist anyone who had signed Charter 08. Most seriously, the prominent writer and dissident Liu Xiaobo, a key drafter of Charter 08, was arrested. Liu had already spent five years in prison for his support of peaceful Tiananmen Square protests in 1989. Held for more than a year with limited access to his wife or his lawyer, Liu was put on trial for subversion. In December 2009, he was sentenced to 11 years in prison.
Despite Liu’s imprisonment, his ideas cannot be shackled. Charter 08 has articulated an alternative vision of China, challenging the official line that any decisions on reforms are the exclusive province of the state. It has encouraged younger Chinese to become politically active, and boldly made the case for the rule of law and constitutional multiparty democracy. And it has served as a jumping-off point for a series of conversations and essays on how to get there.
Perhaps most important, as in Czechoslovakia in the 1970s, Charter 08 has forged connections among different groups that did not exist before. Before Charter 08, “we had to live in a certain kind of separate and solitary state,” one signatory wrote. “We were not good at expressing our own personal experiences to those around us.”
Liu Xiaobo and Charter 08 are changing that, for the better.

The authors "ask the Nobel Committee to honor Liu Xiaobo's more than two decades of unflinching and peaceful advocacy for reform, and to make him the first Chinese recipient of that prestigious award."
Posted by Eddie Cheng at 9:18 PM No comments:

Another "Last Lesson" on Tiananmen

Two years ago, near the 19th anniversary of Tiananmen massacre, Xiao Han (萧瀚), then an associate professor at the University of Political Science and Law, delivered an unexpected lecture to his departing class, commemorating that historical event. He then resigned from the school. The lecture was hailed as the "last lesson."

That history has repeated itself this year. Internet in China is currently abuzz on another occurrence of the "last lesson," this time from a teacher named Niu Yongbin (牛永斌) from the Jinan University in Canton. According to some of the posts, he interrupted a regular class in the evening of June 3rd, the 21st anniversary of the massacre and started to tell the story of what he called as "the biggest tragedy of the Republic." He went on for three hours without any break and showed videos of the event.

It seems that Niu Yongbin was a student at People's University in 1989 and participated in the movement himself.

Niu Yongbin also resigned from his school shortly after the lecture and left the campus. His whereabouts is unknown. Indeed, it was an effort of some of his students to locate him that initiated the current buzz on the Internet.
Posted by Eddie Cheng at 8:37 PM No comments:

According to the Internet news source boxun.com, 1989 student leader Liu Gang has filed a lawsuit in the United States District Court at Southern District of New York. The suit lists Chinese President Hu Jintao and three other top military leaders in China as defendants. It claims that the Chinese military has been dispatching its personnel to the US and conducting activities detrimental to the life, career, and safety of Chinese dissident such as Liu Gang himself.
In the last few months, Liu Gang also published articles in Internet forums detailing his troubled marriage and court battles involving divorce and accusations of domestic violence. He has hinted that Chinese government agents may be behind what he describes as his wife's irrational and erratic behaviors.
Posted by Eddie Cheng at 7:09 PM No comments: