The Underground reported today that former student leader Chai Ling has embraced Christian faith and was baptized over the Easter holiday.
In a lengthy testimony, which is available here, Chai Ling recalled her first encounter with the Bible while still an undergraduate student in Peking University. She also briefly told the story of the movement without going into much details. Curiously, she described her survival as "for some miraculous reason, I survived," without even a hint of the efforts Zhou Dou and Hou Dejian had made to negotiate a peaceful withdraw, or the dramatic voice vote by the student collective led by her former husband Feng Congde. It appears that she only needs to credit her new found Lord now.
Almost a year ago, after being absent from public scene for about a decade, Chai Ling made a high-profile "return to the movement," pledging large donations and active participation. She hasn't been heard much since, other than an ongoing lawsuit against the producers of documentary Gate of Heavenly Peace. In her testimony, she described how Chinese government agents had harassed her family in China for her limited involvement. It was also during that time that she suffered a panic attack and then eventually found God, according to her testimony.
Posted by Eddie Cheng at 4:52 PM No comments:

Under the Jacaranda Tree Retraces the Days 21 Years Ago

Diane Gatterdam at the Under the Jacaranda Tree blog is currently writing a series posts retracing the 1989 student movement in 1989. From what has so far published for April 15, April 16, April 17, April 18, April 19, and April 20, this will be a very detailed and impressive series.
However, the posts present the events as facts, without links or citation to indicate their sources or basis.
Last year, at the 20th anniversary, this blog had also run a daily chronology of the events. In 2008, this blog ran an almost-daily summarization of reports from the New York Times archives.
Posted by Eddie Cheng at 5:30 PM No comments: 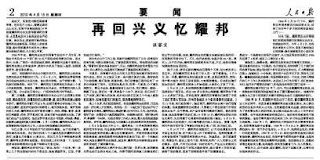 It's that time of the year again. April 15 marks the death of Hu Yaobang in 1989, which sparked the student movement that year. In the years past, there has only been occasional, but rather scarce mention of this anniversary in the official media in China.
It is therefore quite surprising to see that today's People's Daily carries an article by Premier Wen Jiaobao as a remembrance of Hu Yaobang.
In the article, Wen Jiabao movingly describes how he was a staff member in Hu Yaobang's entourage when they toured the vast rural areas of China more than 20 years ago. He remembers Hu Yaobang as a man of the people who had worked hard to bring the country out of her desperate poverty.
Quite interestingly, Wen Jiabao mentioned that, "in the January of 1987, after Comrade Yaobang was no longer an important leader of the Party Central, I visited him often." He also claimed that he had always been at Hu Yaobang's side after the latter's heart attack on April 8, 1989 and have been visiting Hu Yaobang's family during the Spring Festival every year since his passing.
It is quite a strong hint on the history of Hu Yaobang's downfall from the sitting Premier.
(An English translation of Wen Jiabao's essay can be read here.)
Posted by Eddie Cheng at 8:35 PM No comments: 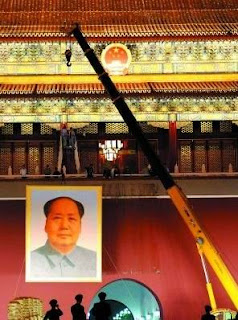 The Telegraph confirmed a story that had been circulated on the Internet for a couple of days, that the giant portrait of Chairman Mao on Tiananmen was defaced by a man throwing ink bottles on it on April 5. The man was comprehended but no detail about him or his motive was disclosed. April 5 is the memorial day in Chinese tradition.
During the 1989 student movement, three teachers from Mao's hometown defaced Mao's portrait, creating a temporary but not-so-insignificant side show for the movement. The three men were later sentenced to 16 years, 20 years, and life, respectively. (They have since been released and currently live in America.)
More recently in 2007, a man threw flaming object to the portrait and also managed to cause damage to it.
Posted by Eddie Cheng at 8:17 PM No comments: