Wang Dan was invited to participate in a conference in Hong Kong but his application for an entry visa was denied by the Chinese consulate. In exile, Wang Dan has maintained his Chinese citizenship but his passport had expired in 2003, when the Chinese officials refused to renew it. Early this year, he had planed for a protest on his citizenship rights, which was later indefinitely postponed due to the earthquake disaster in China. 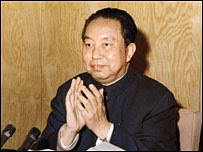 The one-time "Wise Leader of China", Hua Guofeng (华国锋), has passed away with only a whimper in China. The official announcement only mentioned that he had served in "important positions within the [Communist] Party and the government" without mentioning what those positions were.

In 1976, the previously little-known provincial leader became the surprise successor of the "Great Leader" Chairman Mao Zedong. He assumed the positions of the Party Chairman, President of the nation, as well as the Premier. But his main accomplishment would be the arrest of the so-called Gang of Four that included Mao Zedong's own widow, barely a month after Mao Zedong's death. The coup also signaled the end of the decade-long Great Proletarian Cultural Revolution.

Hua Guofeng nonetheless chose to cling to the ideologue of Mao Zedong and saw his grasp of power eroding with the re-emergence of Deng Xiaoping. In December, 1978, Deng Xiaoping engineered a much less dramatic coup to depose Hua Guofeng. That action kicked off the great reform of China. 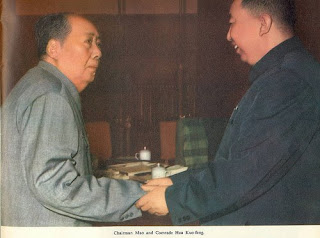 After losing the top leadership posts, Hua Guofeng lingered on as a nominal leader, making rare and insignificant appearances only at large Party Congresses. He was 87 years old.
Posted by Eddie Cheng at 10:17 AM No comments:

Washington Post reports today that "In Tiananmen of Games, No Trace of '89 Massacre". It interviewed or reported the stories of Liu Xiaobo, Wang Dan, Ding Zilin, and Fang Zheng. The report mentioned that Liu Xiaobo has never returned to the Tiananmen Square since the night of the massacre, although he lives in the city of Beijing.

Neither Liu Xiaobo nor Wang Dan sees any hope for an open discussion of the events of the 1989 any time soon. Wang Dan was quoted saying that "The government lacks the confidence. It's very clear a crime was committed against the people. They're afraid of being blamed."
Posted by Eddie Cheng at 10:16 AM No comments:

Yang Jianli, who had embarked on a walk for Tiananmen anniversary, is currently stuck in detention at Hong Kong. He was en route from Japan to Sichuan, where he said he intended to visit the earthquake disaster area and found a new school with donations he had collected overseas. He refused to be sent back to Japan.

Yang Jianli is traveling with a valid passport from the People's Republic of China. His original Chinese passport had become invalid after the government refused to renew it for his activities during the 1989 student movement. In 2002, he entered China with a friend's passport and was caught, for which he served out a five-year sentence in China. After his release, he was able to obtain a new passport before leaving the country. Yang Jianli stated that he had used the passport to travel to Hong Kong earlier this year without any problems.

Hong Kong, a special territory of China, technically has the right to deny entry any person who is not a resident, even Chinese citizens.
Posted by Eddie Cheng at 10:35 AM No comments:

An Athlete With A Crushed Olympic Dream

On the eve of the Beijing Olympics, the Independent carried a profile of Fang Zheng (方政), a former athlete who lost both of his legs during the Tiananmen Massacre.

In 1989, Fang Zheng was a promising twenty-three-year-old discus thrower with a dream for the Olympics. In the early morning of June 4, he was with the students who had withdrawn from Tiananmen Square and on their way back to the campus area. On Chang'an Avenue at the Liubukou(六部口) intersection, three tanks suddenly rushed into the student formation. Fang Zheng was caught under while he was helping a female student. Fang Zheng had previously given a testimony of his experience. The gruesome scene at Liubukou, including Fang Zheng at moments after his injury, was captured in photographs and published in a French newspaper. Please be warned before following this link for the pictures.

As a double amputee, Fang Zheng continued with his athletic career in discus and javelin throwing. In 1992, he won gold medals in All-China Paralympics Game and qualified for international competition. But the government denied this opportunity from him.

In this report, Fang Zheng was quoted saying that he wishes the Beijing Olympics well and thinks that the Olympics will make China more open. But he does not plan to go to Beijing for the Olympics or Paralympics. "These days I live a very ordinary life. I am just an ordinary civilian."
Posted by Eddie Cheng at 8:12 PM No comments:

A new web site is providing downloadable PDF files of the map of Tiananmen Massacre. The maps are produced based on the previously published maps by Tiananmen Mothers.

The web site apparently intended their maps to be a special kind of tourist guide for people traveling for the Beijing Olympics:

Visitors to the Summer Olympic Games in Beijing will be in a city that fewer than twenty years ago was the site of a massacre of innocent civilians by their government. As you enjoy the athletic events and the sights of the city, you may find yourself at street corners, subway stops, in parks or near hospitals where ordinary Chinese men and women were murdered.

The site has no contact information but the Weekly Standard identified its creator as Ellen Bork and associates.
Posted by Eddie Cheng at 12:00 PM No comments:

Just four days before the Beijing Olympics, about 20 residents of Beijing staged a protest march at Qianmen, just south of the Tiananmen Square. They were protesting against being evicted from their homes to make way of business development in the name of the Beijing Olympics. The protest did not last long as the crowd was quickly taken away from the scene.

Obviously, this protest happened at a sensitive area, instead of the remote "protest zones" set up by the Chinese government. There have been reports that several groups had applied but denied permission to stage protests within those designated zones.
Posted by Eddie Cheng at 8:47 AM No comments: