Chen Ziming Arrives at US for Cancer Treatment

The prominent Chinese dissident Chen Ziming has now arrived at US. He will be receiving treatment in a Massachusetts hospital for pancreatic cancer which is reported as at the critical condition. 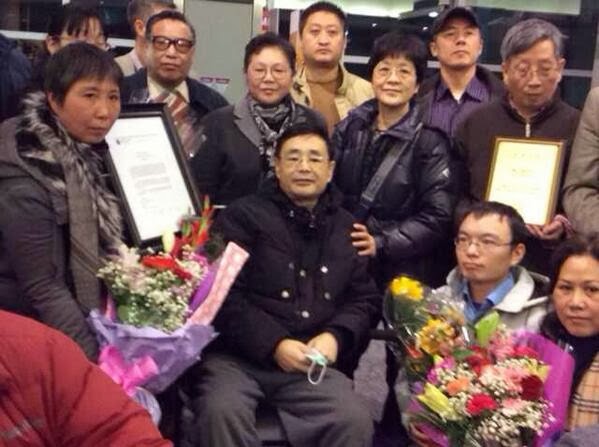 Along with Wang Juntao, Chen Ziming was sentenced to 13 years prison after the 1989 student movement as a "black hand" behind that movement. He served out his sentence and chose to remain in China to continue his writing and dissident activities.

In 2008, he was allowed to travel abroad for a brief visit to Australia.

The famous Chinese rock star Cui Jian, who once performed for the hunger strike students at Tiananmen Square in 1989, recently turned down an invitation to perform in this year's Spring Festival Gala. The gala, hosted by the official CCTV, is considered one of the most famous and privileged venues for stage artists.

The New York Times explained that the issue was censorship:

“In the end Mr. Cui Jian can’t participate in this performance,” his agent, You You, told The New York Times in an e-mail. Asked why, she replied, “Because we cannot change the song lyrics.”

Ms. You declined to elaborate on the censorship process but held out the possibility that Mr. Cui could perform if no cuts to his songs were required. “We are still waiting for the results of the censorship,” she said.

In Chinese social websites, You You later confirmed that Cui Jian is now officially out of the show because the organizers insisted on him to perform a different song than his most famous "Nothing to My Name," or change its lyrics.

This Day in 1989: January 6, Fang Lizhi Wrote a Letter to Deng Xiaoping

On January 6, 1989, physicist Fang Lizhi, then working at the Beijing Astronomical Observatory, wrote a letter to Deng Xiaoping, calling for an amnesty for political prisoners.

With this letter, Fang Lizhi broke his silence of a couple of years after being expelled from the Chinese Communist Party and stripped all his previous positions at University of Science and Technology of China for his accused involvement in an earlier student movement.

He was inspired by the study of the recently discovered supernova SN 1987A. Called "guest stars" in ancient China, supernova was traditionally regarded as a signal to the emperors to announce a general amnesty as a gesture to the mighty heaven. He took the task as his own and wrote the above letter (see full test in English here). Instead of supernova, however, he used the more modern "year of anniversaries" as his pretense for the amnesty call.

Fang Lizhi sent the original by dropping it in a mailbox. He then showed a copy of it to a sympathetic official who had inside channels to Deng Xiaoping's office and another copy to a few foreign reporters in Beijing, who made it public. It was then known as Fang Lizhi's Open Letter to Deng Xiaoping.