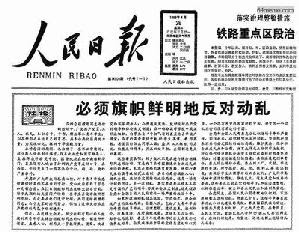 It was only the very early days of the student movement when students were trying hard to maintain their stance as "pure", democratic, and patriotic. Yet the editorial had already characterized the movement as turmoil, a planned conspiracy, and other familiar terms aimed at enemies of the state.

The content of the editorial was based on an unpublished speech by Deng Xiaoping himself. While away in North Korea on a state visit, General Secretary Zhao Ziyang approved its publication by telegram.

The harsh wording of the editorial had an immediate and devastating effect on students, who, after much dramatic struggle, responded with the biggest demonstration on April 27. In the following weeks, recalling the editorial became a focal point in students' demands. There were credible hints from Zhao Ziyang and his camp within the leadership, and arguably from Deng Xiaoping himself, that they were willing to yield from the tough stance of the editorial. But none of them could make that decision formal and official. The deadlock on the editorial eventually triggered a hunger strike by students, martial law by the government, and drove the standoff into a tragic massacre.

The following English translation of the editorial was from the official Foreign Broadcast Information Service and taken from the Gate of Heavenly Peace website:

IT IS NECESSARY TO TAKE A CLEAR-CUT STAND AGAINST DISTURBANCES

In their activities to mourn the death of Comrade Hu Yaobang, communists, workers, peasants, intellectuals, cadres, members of the People's Liberation Army and young students have expressed their grief in various ways. They have also expressed their determination to turn grief into strength to make contributions in realizing the four modernizations and invigorating the Chinese nation.

Some abnormal phenomena have also occurred during the mourning activities. Taking advantage of the situation, an extremely small number of people spread rumors, attacked party and state leaders by name, and instigated the masses to break into the Xinhua Gate at Zhongnanhai, where the party Central Committee and the State Council are located. Some people even shouted such reactionary slogans as, Down with the Communist Party. In Xi'an and Changsha, there have been serious incidents in which some lawbreakers carried out beating, smashing, looting, and burning.

Taking into consideration the feelings of grief suffered by the masses, the party and government have adopted an attitude of tolerance and restraint toward some improper words uttered and actions carried out by the young students when they were emotionally agitated. On April 22, before the memorial meeting was held, some students had already showed up at Tiananmen Square, but they were not asked to leave, as they normally would have been. Instead, they were asked to observe discipline and join in the mourning for Comrade Hu Yaobang. The students on the square were themselves able to consciously maintain order. Owing to the joint efforts by all concerned, it was possible for the memorial meeting to proceed in a solemn and respectful manner.

However, after the memorial meeting, an extremely small number of people with ulterior purposes continued to take advantage of the young students' feelings of grief for Comrade Hu Yaobang to spread all kinds of rumors to poison and confuse people's minds. Using both big- and small-character posters, they vilified, hurled invectives at, and attacked party and state leaders. Blatantly violating the Constitution, they called for opposition to the leadership by the Communist Party and the socialist system. In some of the institutions of higher learning, illegal organizations were formed to seize power from the student unions. In some cases, they even forcibly took over the broadcasting systems on the campuses. In some institutions of higher learning, they instigated the students and teachers to go on strike and even went to the extent of forcibly preventing students from going to classes, usurped the name of the workers' organizations to distribute reactionary handbills, and established ties everywhere in an attempt to create even more serious incidents.

These facts prove that what this extremely small number of people did was not to join in the activities to mourn Comrade Hu Yaobang or to advance the course of socialist democracy in China. Neither were they out to give vent to their grievances. Flaunting the banner of democracy, they undermined democracy and the legal system. Their purpose was to sow dissension among the people, plunge the whole country into chaos and sabotage the political situation of stability and unity. This is a planned conspiracy and a disturbance. Its essence is to, once and for all, negate the leadership of the CPC and the socialist system. This is a serious political struggle confronting the whole party and the people of all nationalities throughout the country.

If we are tolerant of or conniving with this disturbance and let it go unchecked, a seriously chaotic state will appear. Then, the reform and opening up; the improvement of the economic environment and the rectification of the economic order, construction, and development; the control over prices; the improvement of our living standards; the drive to oppose corruption; and the development of democracy and the legal system expected by the people throughout the country, including the young students, will all become empty hopes. Even the tremendous achievements scored in the reform during the past decade may be completely lost, and the great aspiration of the revitalization of China cherished by the whole nation will be hard to realize. A China with very good prospects and a very bright future will become a chaotic and unstable China without any future.

The whole party and the people nationwide should fully understand the seriousness of this struggle, unite to take a clear-cut stand to oppose the disturbance, and firmly preserve the hard-earned situation of political stability and unity, the Constitution, socialist democracy, and the legal system. Under no circumstances should the establishment of any illegal organizations be allowed. It is imperative to firmly stop any acts that use any excuse to infringe upon the rights and interests of legitimate organizations of students. Those who have deliberately fabricated rumors and framed others should be investigated to determine their criminal liabilities according to law. Bans should be placed on unlawful parades and demonstrations and on such acts as going to factories, rural areas, and schools to establish ties. Beating, smashing, looting, and burning should be punished according to law. It is necessary to protect the just rights of students to study in class. The broad masses of students sincerely hope that corruption will be eliminated and democracy will be promoted. These, too, are the demands of the party and the government. These demands can only be realized by strengthening the efforts for improvement and rectification, vigorously pushing forward the reform, and making perfect our socialist democracy and our legal system under the party leadership.

All comrades in the party and the people throughout the country must soberly recognize the fact that our country will have no peaceful days if this disturbance is not checked resolutely. This struggle concerns the success or failure of the reform and opening up, the program of the four modernizations, and the future of our state and nation. Party organizations of the CPC at all levels, the broad masses of members of the Communist Party and the Communist Youth League, all democratic parties and patriotic democratic personages, and the people around the country should make a clear distinction between right and wrong, take positive action, and struggle to firmly and quickly stop the disturbance.