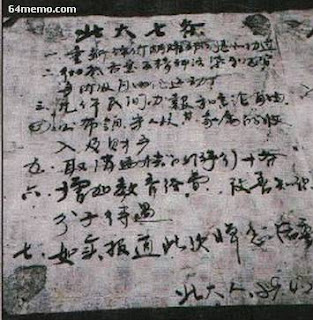 In the early morning of April 18, 1989, hundreds of students from Peking University gathered around the Monument to People's Heroes at Tiananmen Square. They had spent the previous night there guarding the wreaths and flowers dedicated to the newly deceased Hu Yaobang. Wang Dan, Guo Haifeng, Li Jinjin, and Zhang Boli were all among the crowd. They proposed to draft a formal petition to the government.

After much discussion, a "Seven-Point Petition" was drafted:
The petition was first written as big posters. Wang Dan and Li Jinjin made separate attempts to submit them to People's Representatives in the Great Hall of People that day. The list was also widely circulated among the campuses in Beijing and became the focal point in the early stages of the student movement. The government never responded directly to the petition.

On April 22, at the end of the state funeral for Hu Yaobang, three students made the most dramatic scene of kneeling down at the steps of the Great Hall of People and lifting a copy of the Seven-Point Petition over their head.