In the morning of June 28, 1989, Prime Minister Margaret Thatcher met with five Chinese student representatives in her office at No. 10 Downing Street. At that time, there were about 3,500 Chinese students and scholars in UK and some 205 of them were facing expiration of their visa and would have to return to China soon.

The Chinese student representatives expressed gratitude to UK government for her strong condemnation of the Tiananmen Massacre. They hoped the UK government would also suspend all high-level visits between the two countries and also provide protection to the Chinese nationals in UK.

Thatcher promised that her government would "look sympathetically at any applications to stay in the United Kingdoms from those who did not wish to return to China for the present," and provide assistance in the areas of employment permission and health insurance to those with financial difficulties. However, she discouraged Chinese students from seeking long-term political asylum and said that "they should see their future in terms of returning to China to help build a better society there." 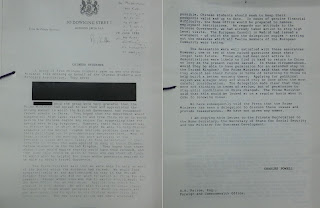 The UK government recently released a set of Home Office documents about Hong Kong and British citzenship and it included those for the preparation as well as summary of this meeting.