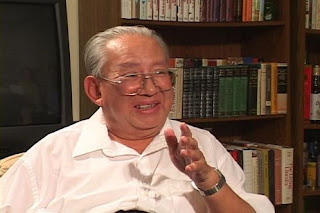 A well-known legal scholar, Yu Haocheng was a Manchu, one of the many ethnic minorities in China. His father was a student leader during the May Fourth Movement in 1919, who later became a department head in Yenching University, the precursor of Peking University, and participated in the Communist underground. Influenced by his father and elder brother, Yu Haocheng participated in the revolutionary activities led by the Communist Party from a very early age. However, his fortune was not blessed: In 1947, he was labeled as an "anti-Party element" and almost expelled from the Party. Then in 1968, he spent three years in the Qincheng prison as a "counter-revolutionary."

After being rehabilitated in the late 1970s, Yu Haocheng became the head of a small publishing house, as well as the editor-in-chief for the scholastic journal Legal Studies. He became an active figure in the intellectual circle in Beijing. In 1988, he was a part of the effort to launch a magazine New Enlightenment, for which he wrote an essay titled "People should Have the Freedom from Fear."

In February, 1989, Yu Haocheng cosigned an open letter with other intellectuals in Beijing, calling for political system reform. Thereafter and through out the student movement, he maintained a consistent presence in the various demonstrations and meetings among the intellectuals, including as a part of the 12 scholars who went to Tiananmen Square in an attempt to persuade students stop their hunger strike.

After the crackdown, Yu Haocheng was officially expelled from the Communist Party and was jailed for a year and a half. One of his chief offensives was that he had once made suggestions to Liu Gang when the latter was drafting the charter for the new Beijing Students Autonomous Federation.

In his elder years, Yu Haocheng toured several universities in the US and wrote memoirs. In 2008, he was an early signatorie for the "Charter of 2008."