On May 25, 1990, an old boat by the name of "Goddess of Democracy" was auctioned off in Taiwan's Keelong Port, marking the end of a project by oversea democracy movement to broadcast directly to mainland China.

In early March, 1990, The Democratic China Front organization and other oversea supporters launched the project. They spent $400,000 to purchase an explorer boat built in 1963 and refurbished and quipped it with radio broadcasting instruments. On March 17, the boat sailed from France to Asia with a plan to broadcast from off the eastern coast of China.

Since the plan might conflict with international laws, the boat was denied entry in many ports on its way. After arriving at Taiwan in May, it again failed to actually broadcast. Thus, it was finally auctioned. A businessman in Taiwan by the name of Wu Mengwu (吴孟武) bought the ship for $550,000. 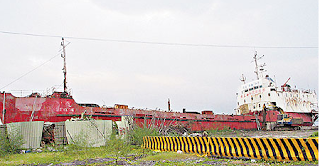 Wu Mengwu later moved the boat to Tainan and attempted to remodel it into a Tiananmen Massacre Memorial. The effort also failed. In September, 2003, the boat was ordered to be disassembled by a local court due to overdue port fees.