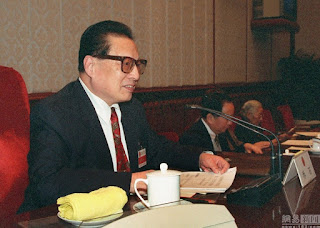 Qiao Shi was born in 1924 at Shanghai. He joined the Chinese Communist Party when he was not even 16 years old and quickly became active in the underground. He helped lead a few student movements in that era.

In the early 1980s, Qiao Shi's political career was reaching its peak. He held the offices of Party Central Chief of Staff, Head of Department of Personnel, Head of the Political and Law Commission, etc., as well as a member of the most powerful Politburo Standing Committee. For many years, he was in charge of the personnel and disciplinary matters of the Party.

In 1988, he had an extended work trip to Tibet, for which he was connected to the execution of martial law in Lhasa in March, 1989.

During the 1989 student movement, Qiao Shi had kept an extremely low profile. He only appeared in public a couple of times along with other Politburo members and never voiced any opinion of his own. In the few days after the massacre when an uncertain power vacuum existed at the top, Qiao Shi was once rumored to be the new General Secretary. However, when the dust settled, the post unexpected went to Jiang Zemin. Qiao Shi later became the Chairman of the National People's Congress and the number 3 leader behind Jiang Zemin and Li Peng in the new leadership collective.

In November, 1989, Qiao Shi led a delegate of Chinese Communist Party dignitaries to visit a few east European countries. They made to Romania and Bulgaria on the eve of their respective political changes, but was too late for Czechoslovak, whose Communist Party collapsed just days before.