Document of 1989: 21 Most Wanted Student Leaders 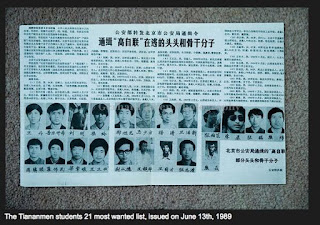 The illegal organization "Beijing Students Autonomous Federation" instigated and organized the counter-revolutionary rebellion in Beijing. It is now decided to pursue its head and key members, including Wang Dan and other 21 people, as Most Wanted. After receiving this order, please immediately arrange investigation work. If found, immediate arrest the targets and inform the Beijing Public Security Bureau.

(1) Wang Dan, male, 24, from Jilin, student of the Department of History at Peking University, 1.73m height.

(2) Wuer Kaixi, male, born on February 17, 1968, from Xinjiang, student of the Department of Education at Beijing Normal University.

(7) Liang Qingdun, male, born on May 11, 1969, from Sichuan, student of Department of Psychology at Beijing Normal University

(9) Zheng Xuguang, male, 20, from Henan, student of Beijing University of Aeronautics and Astronautics

(11) Yang Tao, male, 19, from Fujian, student of Department of History at Peking University

(12) Wang Zhixing, male, born in November, 1967, from Shanxi, student of the University of Political Science and Law

(16) Zhang Zhiqing, male, born in June, 1964, from Shanxi, student of the University of Political Science and Law

(20) Xiong Wei, male, born in July, 1966, from Hubei, student of Department of Radio at Tsinghua University