According to the Internet site Canyu, a group of people in Guizhou, China, successfully staged a two-hour commemorative session in a public park today for the 23rd anniversary of the Tiananmen Massacre. It is believed to be the first such occurrence inside China. 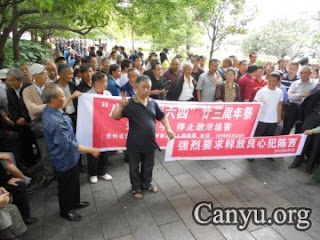 The banners shown in the pictures state that "Remembrance of 23rd Anniversary of '89' '64'", "Investigate Murderers, Stop Political Suppression", and "Strongly Demand the Release of Political Prisoner Chen Xi".
Posted by eddie at 12:07 AM