Recollections of 1989: The Making of Goddess of Democracy 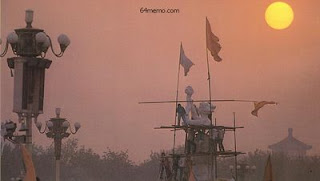 On May 30, 1989, the statue Goddess of Democracy was erected at Tiananmen Square and became one of the lasting symbols of the 1989 student movement. The following is a re-telling of the making of that statue, originally published in the book Children of Dragon, by a sculptor named Cao Xinyuan:

Nothing excites a sculptor as much as seeing a work of her own creation take shape. But although I was watching the creation of a sculpture that I had had no part in making, I nevertheless felt the same excitement. It was the "Goddess of Democracy" statue that stood for five days in Tiananmen Square.

Until last year I was a graduate student at the Central Academy of Fine Arts in Beijing, where the sculpture was made. I was living there when these events took place.

Students and faculty of the Central Academy of Fine Arts, which is located only a short distance from Tiananmen Square, had from the beginning been actively involved in the demonstrations. When the movement wanted to honor the recently deceased Hu Yaobang, the students painted a huge oil portrait of him and propped it against the Monument of People's Heroes in the square. On May 27, a representative of the Beijing Autonomous Student Union came to the Central Academy to ask them to produce another large-scale work of art, this time a statue, and that it be completed in time for the great demonstration planned for the thirtieth. The Student Union, which gave 8,000 yuan for materials and expenses, suggested that the sculpture be a replica of the Statue of Liberty, like the one that had been carried by demonstrators in Shanghai two days earlier. But the Central Academy sculpture students rejected that idea, both because it might be taken as too openly pro-American and because copying an existing work was contrary to their principles as creative artists. What was needed, they felt, was a new, specifically Chinese symbol. But they faced a problem: how could an original, major sculpture be finished in three days, even if they worked through the nights?

Their solution was ingenious, and explains some features of the sculpture as it took shape: its slightly off-balance look and its posture with two hands raised to hold up its torch. The students, with the strong academic training that young artists receive in China, chose a thoroughly academic approach to their problem: they decided to adapt to their purpose a studio practice work that one of them had already made, a foot-and-a-half clay sculpture of a nude man grasping a pole with two raised hands and leaning his weight on it. It had been done originally as a demonstration of how the musculature and distribution of weight are affected when the center of gravity is shifted outside of the body. This was the unlikely beginning from which the Goddess of Liberty and Democracy was to grow. The students cut off the lower part of the pole and added a flame at the top to turn it into a torch; they repositioned the body into a more upright position; they changed the man's face to that of a woman, added breasts, and finally draped the whole figure in a robe.

This transformed model was the basis for the thirty-seven-foot-high statue. It was first cut into four horizontal sections, and teams of young sculptors constructed the corresponding parts of the huge work, which would be assembled on the square. The main material was foam plastic, large pieces of it carved and held together by wire, with plaster added to the surface to join the pieces more strongly and to allow finer modeling. The four sections were fairly light, each needing only five or six students to lift.

The students had intended to bring the statue in in one of the academy's trucks. But the Security Bureau sent word that any driver daring to take them would lose his license. In the end, the students hired six Beijing carts, a bicycle in front and a flat cart with two wheels behind; four of these carried the sections of the statue, the other two carried the tools and materials.

The route had been announced: turn left out of the academy, then westward to the Donghuamen, the east gate of the Forbidden City, around the road between the wall and the moat to the square. Our announcement was made to deceive the police, in case they were waiting to stop us. In fact, we turned right out of the academy and followed the shorter route, down Wangfujing, right along Changan Avenue, past the Beijing Hotel.

The site on the square where the statue was to be erected had been carefully chosen. It was on a great axis, heavy with both cosmological and political symbolism, extending from the main entrance of the Forbidden City, with the huge portrait of Mao Zedong over it; through the Monument to the People's Heroes, which had become the command headquarters of the student movement. The statue was to be set up just across Changan Avenue from Mao so that it would confront him face-to-face. When we arrived around 10:30 at night, a huge crowd, perhaps 50,000 people, had gathered around the tall scaffolding of iron poles that had already been erected to support the statue. The parts were placed one on another, attached to this iron frame; plaster was poured into the hollow core, vertical poles extended from the ground up through the center to hold it upright. The exposed iron supports were then cut away, leaving the statue freestanding. It stood on a base also made of rods, about six feet in height, which was later covered with cloth. The statue was made so that once assembled it could not be taken apart again but would have to be destroyed all at once.

The work continued through the night. A circle of students joined hands around the statue so that those working on it would be undisturbed. By noon of May 30, it was ready for the unveiling ceremony, for which many people had waited all night. Actually, only the face was "veiled" by two pieces of cloth, bright blue and red -- the students never collected enough cloth to cover the whole figure.

The ceremony was simple and very moving. A statement had been prepared about the meaning of the statue and was read by a woman, probably a student at the Broadcasting Academy, who had a good Mandarin accent. "We have made this statue," the statement said, "as a memorial to democracy, and to express our respect for the hunger-strikers, for the students who have stayed in the square so many days, and for all others involved in the movement." Two Beijing residents, a woman and a man, had been chosen at random from the crowd and invited into the circle to pull the strings that would "unveil" the sculpture. When the cloths fell, the crowd burst into cheers, there were shouts of "Long live democracy!" and other slogans, and some began to sing the "Internationale." A musical performance was given by students from the Central Academy of Music: choral rendition of the "Hymn to Joy" from Beethoven's Ninth Symphony, another foreign song and one Chinese, and finally the "Internationale" again.

That night there were strong winds and rain. We rushed to the square in the morning to see if the statue had been damaged. But it had endured this first serious test without harm. We took this as a good omen...