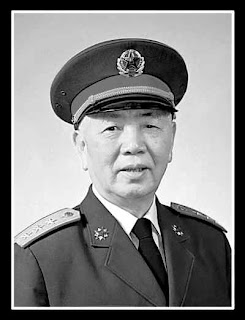 When General Liu Huaqing died in Beijing on January 14, he was praised, as part of the standard protocol as "an excellent party member, a faithful Communist fighter, outstanding proletarian, politician, soldier, and outstanding leader of the state and party" by the Chinese government. In addition, he was hailed as the "father of modern Chinese navy" by the international media.

Neither of them, however, made any mention of his role in the 1989 Tiananmen Massacre, although the exact extent of which, like many other official government activities at the time, remain as state secret and unknown to the general public.

In 1989, Liu Huaqing was the Vice Chairman of the Central Military Commission, serving under Deng Xiaoping, who retained the chairmanship in his semi-retirement. From that post, he was one of the three most prominent commanders of the army that first enforced (or at least tried to enforce) the martial law and then carried out the massacre. Indeed, many sources identified him as the command-in-chief of the martial law troops, although this was not officially confirmed.

After 1989, Liu Huaqing continued to play a significant role in the top leadership as the only military person in the all-powerful Politburo Standing Committee through the 1990s.