There is a new giant statue at Tiananmen Square. It is not that of late Chairman Mao Zedong, although it is similar in size of the numerous Mao statues all over China during the Culture Revolution era.
It is that of Confucius, the ancient philosopher that Mao Zedong had spent his last few years loathing. 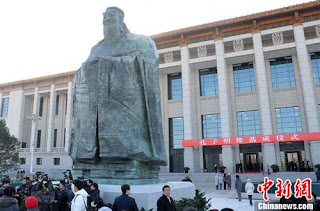 The new statue stands in front of the National Museum of China on the east edge of Tiananmen Square. It is part of a grand renovation project for the museum. It is also a rare new addition to the famous Square.
No words on how Mao Zedong, whose body is still being preserved in his own Mausoleum in the middle of the same Square, reacts to his new neighbor.
Posted by Eddie Cheng at 9:18 PM