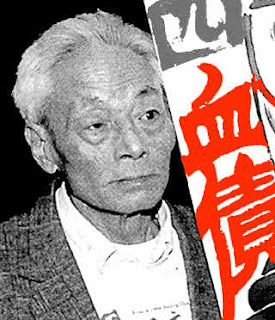 The outspoken author Wang Ruowang belonged to the older generation who had joined the Communist revolution in China in the very earlier days. In fact, he got himself in jail for that when he was barely a teenager, sentenced to 10 years under the Nationalist regime in 1934. Fortunately he was released only 3 years later. He immediately made a trip to Yan'an, the then heartland of the communists, and joined the Chinese Communist Party. He was only 19 years old then.

Yan'an did not turn out to be the holy place he had dreamed about. He got himself in trouble quickly there due to his outspokenness and saw one of his friends killed during an ideological purge.

In the 1950s, he was labeled as a "rightist" for some of the articles he published. He was expelled from the Party and sent to countryside to reform through labor. That did not work on him however, for he got into trouble again in 1968 by speaking negatively about the top leadership. This time he was sent to jail for 4 years. It's his second time in prison, but first one under the communist rule.

Like most of his compatriots, Wang Ruowang was rehabilitated in the late 1970s with Deng Xiaoping's reform. He was re-admitted into the Party and assigned to be a deputy editor of a literary magazine in Shanghai. And he started writing again.

Wang Ruowang published a series of novels and articles in the liberating 1980s. But it was an article he published in 1986 that got the most attention, as it was titled One-Party Dictatorship Can Only Lead to Tyranny.

So in January of 1987, Wang Ruowang was named one of the symbols of "Bourgeois Liberalization" movement, along with Fang Lizhi and Liu Binyan. [However, there are credible indications that he was named because of a mistake by Deng Xiaoping.] He was once again expelled from the Party. He was also forbidden to travel abroad.

In early 1989, Wang Ruowang marched in the street of Shanghai in April to protest the purge of newspaper World Economic Herald, an early crackdown engineered by then mayor Jiang Zemin. He marched again in May to support the student hunger strike in Beijing.

After the Tiananmen Massacre, Wang Ruowang was once again put in jail for his earlier actions--the third time he saw prison. He was already 71 years old.

He was finally allowed to travel abroad in 1992 and settled in America. He traveled extensively in North America in an attempt to consolidate the hopelessly fragmented oversea dissident movement. His effort failed miserably.