Five years after his death in America, the famous journalist and dissident Liu Binyan finally found his resting place in a cemetery in a Beijing suburb. 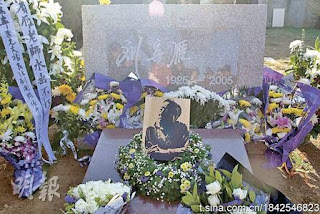 His tombstone bears his name and birth/death years. However, the words he wished to be presented, "this Chinese laying here, he had done what he should do and said what he should say", is absent. Apparently that was not allowed by the authority.
Posted by Eddie Cheng at 8:44 PM