The 1980s was a decade when modern western art forms started to propagate in China. The very first modern art exhibition in China was initially planned for 1987. But that attempt was foiled by the anti-Bourgeois Liberalization campaign following student unrest in the winter of 1986-1987. Two years later, the China/Avant-garde exhibition finally opened in Beijing in February 1989. 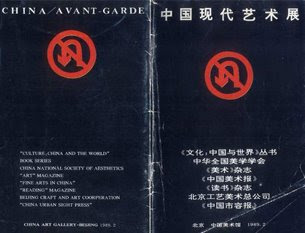 It was quite a show. About three hundred art pieces from all over the country were displayed. An usual presentation of Chairman Mao Zedong by the artist Wang Guangyi (王广义) was the talk of the town.

But there was more. A couple of performance artists brought in a revolver and fired shots to their artwork, resulting a suspension of the exhibition. A few months later, the 1989 student movement broke out. Many of the artists joined in.

It is now twenty years since that eccentric art exhibition. Modern arts are no longer foreign in China. Some of those artists planed for an anniversary exhibit commemorating that event. On the eve of its opening, however, police shut it down. Apparently, anything associated with a twenty-year anniversary is too sensitive for this year.
Posted by Eddie Cheng at 9:11 PM