Xinhuamen (新华门), or the Gate of New China, is the main entrance of Zhongnanhai, the secretive compound that houses the leadership of both Communist Party and the government.

For many decades, the gate was surrounded by two gigantic slogans on each side: "Long Live the Great Communist Party of China" and "Long Live the Invicible Mao Zedong Thoughts". 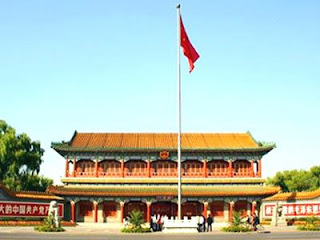 One student in Beijing, however, is taking exception with one of the slogans. As reported by the Hong Kong newspaper Ming Bao, Zhao Qingtian (赵婧天), a senior in the Northern Industrial University (北方工业大学), wrote a letter to the top leaders including President Hu Jintao and Premier Wen Jiabao that the slogans should be changed to reflect the changing times.

The slogan "Long Live the Invincible Mao Zedong Thoughts", she argues, is especially outdated. Many of Mao's teachings have already been proven wrong. The slogan should be replaced by something closer to the current state of China's politics.

Below is a picture of Zhao Qingtian in front of the slogan at issue: 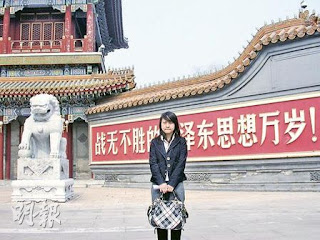 In the early days of 1989 movement, Xinhuamen was the site of a couple large scale protests and scuffles with police.
Posted by Eddie Cheng at 5:25 PM