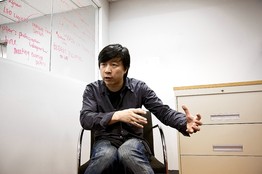 Now, Mr. Shen, 43 years old and a successful businessman, can be found in the Financial District's Zuccotti Park, where he has become a sort of father figure for Occupy Wall Street.

Nearly every day, he holds planning meetings with the protesters in an unremarkable Broadway office. His responsibilities range widely—from mundane tasks like hunting down paperwork for the unwieldy group to lending advice to younger, self-styled revolutionaries.

Mr. Shen didn't plan to devote all his time to Occupy Wall Street. On Oct. 17, he simply ventured 10 blocks from his home to Zuccotti Park and was intrigued to meet some protesters who knew of his efforts in China. "I was curious about the movement," he said. "Pretty soon, I realized it was not going away. But no good deed goes unpunished."

The paper also quotes Shen Tong commenting: "Last time we wanted a different China, we got shot at. America can still afford to do this nicely."

During the 1989 student movement in China, dozens of 40-something intellectuals had also stayed in Tiananmen Square doing the same thing for much younger student leaders like Shen Tong himself.