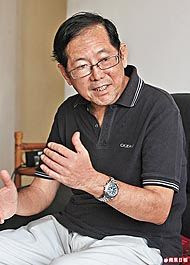 Luo Haixing (罗海星) was born in 1949 in Hong Kong. His father was a prominent magazine editor there and also a member of the Chinese Communist Party. Luo Haixing spent his childhood in mainland China and became a Red Guard during Cultural Revolution while he was in high school. However, his faith in communism was shaken in the 1980s when his father became a victim of a political struggle.

During the 1980s, Luo Haixing spent most of his time in Beijing working for Sino-Hong Kong trade. He was in Beijing when the student movement erupted in 1989. After the massacre, he joined the efforts organized by people in Hong Kong to rescue movement leaders. The details of his involvement is still sketchy, but he was apparently successful in helping a few leaders reach safety in Hong Kong through a makeshift underground route.

Later that year, in an effort to rescue Wang Juntao and Chen Ziming, Luo Haixing fell into a trap and was arrested by the Chinese government on October 14, 1989. He was sentenced for five years. He ended up serving only two years, when he was released on the account of British premier John Major's visit to China in 1991.